“The Ultimate Questions”: Songs and Arias by Modest Mussorgsky (1839-81)

Free and open to the public

Mussorgsky’s songs are dramatic scenes exploring the ultimate realities of human existence. Life and death, war and peace, sin and forgiveness, servitude and freedom, love and hatred – every topic is treated with intense and emotionally freighted expression. The composer’s musical palette is vividly brilliant; he is equally at home with high tragic passions, somber reflection, outbursts of joy, comic and satirical characters, and musical parody. The program will try to do justice to various motives and themes in Mussorgsky, and will feature both his well-known “hits” – such as “The Song of the Flea” and the vocal cycle “Songs and Dances of Death” – and his rarely performed pieces from the early song collection “Years of Youth.”

Yury P. Avvakumov is assistant professor of historical theology and a medievalist at Notre Dame who, in addition to his academic and pastoral career, has appeared as a singer in concert and oratorio in Germany, Austria, Ukraine, and Russia. In South Bend, Avvakumov has performed in Opera Notre Dame as Bartolo in Mozart’s “Le Nozze di Figaro” in Spring 2011.

Jennifer Muñiz is an active performer and educator who has performed in Spain, Italy, Mexico, and the United States, including Carnegie’s Weill Recital Hall in New York City, and the United Nations. Dr. Muñiz joined the faculty of the Swinney Conservatory at Central Methodist University in Missouri as assistant professor of music, piano and theory, in 2012.

This artistic endeavor was made possible, in part, by the Boehnen Fund for Excellence in the Arts through The Institute for Scholarship in the Liberal Arts, College of Arts and Letters, University of Notre Dame. 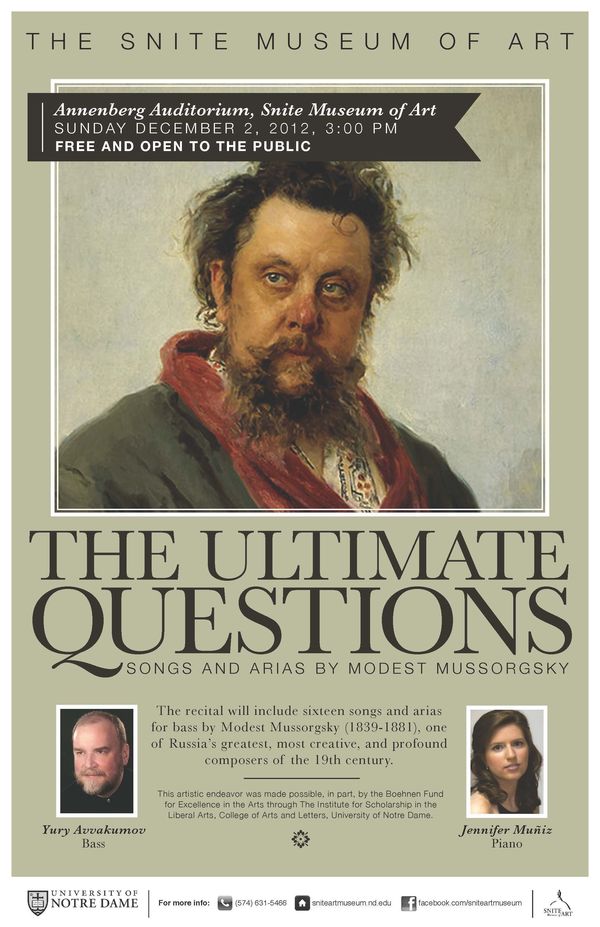