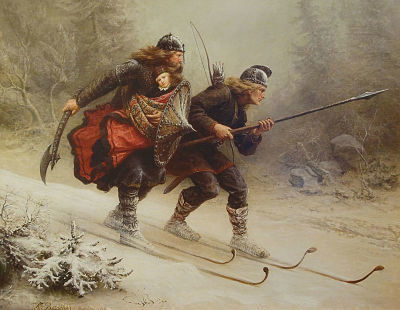 An invitation from Prof. Tim Machan:

It's back! The first film of the year will be a new one, "The Last King," a 2016 movie more-or-less based on more-or-less actual events in the life of the thirteenth-century Norwegian king Håkon Håkonarson (Håkon IV). Shot in Norway (specifically in the mountainous Jotunheimen, the land of the giants) and filmed in Norwegian with English subtitles, the film offers a feast of skiing, fighting, and fighting on skis. The central event depicted in the film is the subject of a famous nineteenth-century nationalist Norwegian painting "Birkebeinerne" (pictured).