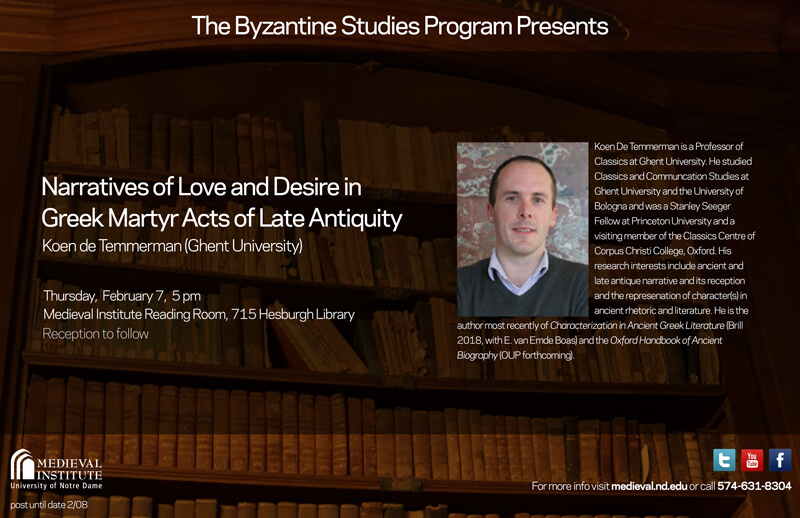 The Byzantine Studies Program presents a lecture by Prof. Koen de Temmerman. A reception will follow.

Koen De Temmerman is a Professor of Classics at Ghent University. He studied Classics and Communication Studies at Ghent University and the University of Bologna, was a postdoctoral Fellow of the Belgian American Educational Foundation at Stanford University, a Stanley Seeger Fellow at Princeton University and a visiting member of the Classics Centre of Corpus Christi College, Oxford. His research interests include ancient and late antique narrative (ancient fiction, biography and, most recently, hagiography), its reception and the representation of character(s) in ancient rhetoric and literature. He is the author of Crafting Characters. Heroes and Heroines in the Ancient Greek Novel (OUP 2014) and the (co-)editor of Writing Biography in Greece and Rome. Narrative Technique and Fictionalization (CUP 2016, with K. Demoen), Characterization in Ancient Greek Literature (Brill 2018, with E. van Emde Boas) and the Oxford Handbook of Ancient Biography (OUP forthcoming). He is also the recipient of two European Research Council grants (Starting Grant 2013, Consolidator Grant 2018).