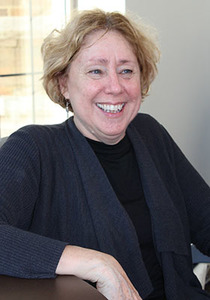 The Medieval Institute welcomed ACC Distinguished Lecturer Robin Fleming, Professor of History at Boston College, last week. Fleming was recently named a MacArthur Fellow and elected a Fellow of the Medieval Academy. Her most recent work focuses on Britain just before and after the fall of the Roman Empire, and she is well-known for using material culture to illuminate the historical record. In her lecture here, arising out of this work, Fleming asked the question, "Who was buried in Anglo-Saxon cemeteries?" and offered an engagingly complex and interdisciplinary response.

The short answer is that close studies of Anglo-Saxon cemeteries, such as the West Heslerton grave site, together with oxygen and strontium isotope analysis of those buried in it, reveal that both indigenous and migrant populations peopled lowland Britain following the fall of the Roman Empire and the loss of societal infrastructure. The populations remaining after the fall sought to establish a new identity; the grave goods of those buried in Anglo-Saxon cemeteries--primarily women and adolescent girls--tell the story of the culture of these people in fifth and sixth century Britain in far more detail than the very limited surviving contemporary textual accounts. For more, read her book Britain After Rome: The Fall and Rise of the Middle Ages, c. 400-1070 (London, 2010). Fleming is also the author of Domesday Book and the Law: Society and Legal Custom in Early Medieval England (1998) and Kings and Lords in Conquest England (1991).