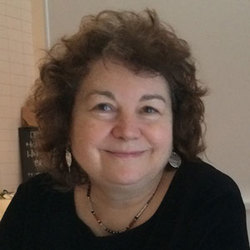 The Medieval Institute was pleased to welcome Susan Rankin, Professor of Medieval Music at the University of Cambridge, as this year’s annual Conway Lecturer. Her lecture series, "Carolingian Transformations," was a study of the development of Carolingian liturgical manuscripts as books for musicians. As is the practice with these lectures, they will be published as a monograph in the Conway Lectures series (University of Notre Dame Press); Rankin is also producing a sister project, Writing Sounds in Carolingian Europe: The Invention of Musical Notation, encompassing particularly the notation study she referenced in these lectures, to be released next year by Cambridge University Press.

On Thursday evening, October 5, Rankin gave the first of three lectures, “Manuscripts for Musicians: 750-900.” This lecture outlined the development of liturgical books used by cantors from high prestige volumes intended for display to a sui generis type of book written and designed for singers by singers. 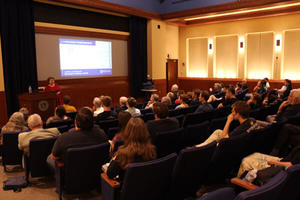 The opening lecture of the 2017 Conway series

For her second lecture on Tuesday, October 10, “Singing the Psalter,” Rankin was joined by Professor Katarina Livljanić, musicologist, vocal performer, and Maître de conferences in medieval music at the Sorbonne in Paris. Livljanić’s voice brought to life Rankin’s explication of the musicality encouraged by Carolingian musical notation with her moving interpretation of several psalms.

For her final lecture, “Books for Cantors,” on Thursday, October 12, Rankin continued to explain how the Carolingian development of neumatic musical notation and of books designed for the use of liturgical singers developed side by side. Livljanić again lent her voice to help the audience understand the kind of musical nuance, driven by the text and musical line, that the manuscript notation represents. 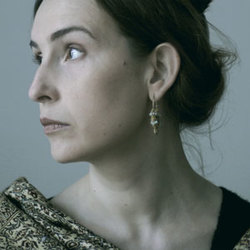 On Friday, October 13, Rankin and Livljanić offered an exciting graduate colloquium for students in the Medieval Institute and the Sacred Music program. In this “voices on” interactive workshop, Rankin explained the spirit and some of the details of Carolingian notation, and Livljanić led the attendees in singing. Following medieval practice, they learned melodies first by rote, then used period neumatic notation and then modern square-note chant notation to support their memory in singing the texts. In trying these different methods, the singers experienced firsthand the startling difference in the choir’s sound when they switched from the medieval notation to the more familiar, modern notation—not a change for the better! As Rankin pointed out, the more flowing Carolingian notation acts to jog the memory and encourages the singer to keep the whole musical line in mind while singing. The later, more familiar-to-us notation can be sight-read, followed even if a singer has never heard the tune before (replacement for, rather than a support of, memory), but it encourages a note-by-note kind of reading and singing that is perhaps more precise but much more fragmented. 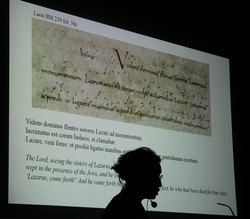 Rankin has been a periodic research visitor to the Institute and we were very glad to welcome her back, this time as our premier lecturer. Of her visits here Rankin praises "the delights of the Medieval Institute community and the extraordinary library, which is unmatched internationally, in my experience" and says "it was a great pleasure to work" at the MI. The Institute likewise thanks Rankin for the great pleasure of her lectures. The musical expertise of Livljanić helped bring to life music whose Carolingian form Rankin has uncovered and made available for the first time in more than a thousand years, and the interactive graduate colloquium brought this new way of understanding and singing chant to dozens of students who may now pass on this revitalized way of singing to their own students.

Read more about the history of the Conway Lecture series.