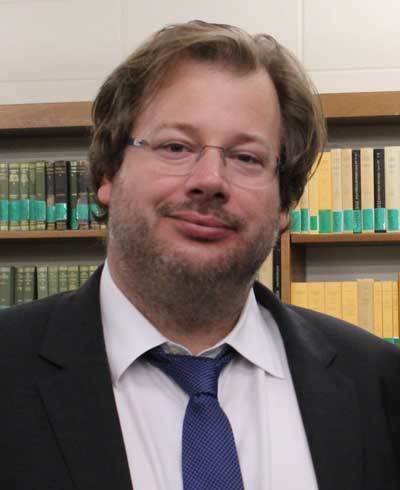 On Thursday, August 24th, the Medieval Institute warmly welcomed guest speaker Christophe Erismann, director of the European Research Council project “Reassessing Ninth Century Philosophy: A Synchronic Approach to the Logical Traditions” at the Institute for Byzantine Studies at the University of Vienna. Erismann gave a lecture entitled "A Felicitous Outcome of Iconoclasm? Theology and Aristotelian Logic in 9th-Century Byzantium.” The subject of the talk was the use of Aristotelian logic—mainly the Aristotelian category of relatives (pros ti) and the concept of homonymy—by the iconophile thinkers Theodore the Stoudite and Nicephorus, Patriarch of Constantinople.

After demonstrating the complexity of the logic applied to the question of images, Erismann claimed that this Aristotelian turn, combined with other elements like several testimonies about philosophical education coming from hagiographical texts and evidence provided by manuscripts copied contemporaneously, allowed a reassessment of intellectual life during the first third of the ninth century and the status of scholarship in Byzantium at that time. This confirms the continuity of learning and education throughout iconoclastic times, notably for ensuring the education of civil servants. Erismann discussed further the possible role of iconoclasts, mainly John the Grammarian, in this decision to employ logic as well as the legacy of this new argumentation about images.