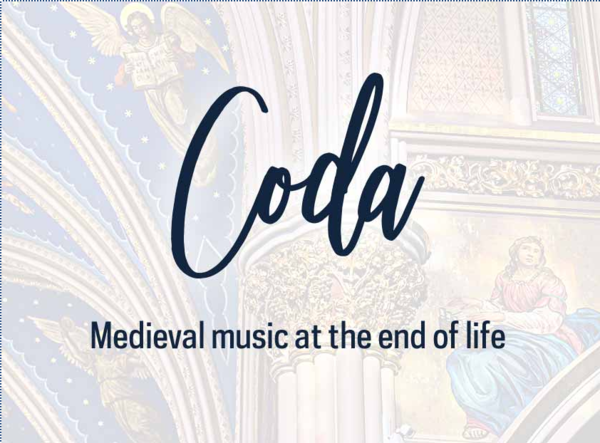 We have become, as Elaine Stratton Hild describes it, very specialized in the area of end-of-life care. “We are excellent at understanding the body, and how we can control symptoms, control pain,” she says. “On the other hand, because we’ve specialized in that, we’ve created some weaknesses in other areas.”

Hild is a musicologist who specializes in Medieval chants for the sick and dying. Her work is noteworthy for its scholarly contribution, but it may also yield observations that can help strengthen those “weaknesses” that exist in end-of-life care.

To learn these traditions, Hild traveled to Germany, to Julius-Maximilians-Universität Würzburg. She learned Latin and learned the notation used in Medieval manuscripts. She labored to find manuscript sources that might contain rites for the sick and dying, combing through catalog descriptions and traveling to engage with the manuscripts themselves. The work requires a certain blend of tenacity and patience. When she found a manuscript likely to have the rites, she examined it to find a certain notation indicating it was music, and if it was specific enough to reconstruct a melody. And then the output: transcribing the recoverable notations into a modern musical framework. It’s a skillset that is all but extinct. Hild estimates fewer than 100 people in the world can do it.

Hild came to the Notre Dame Institute for Advanced Study (NDIAS) as a residential fellow to create a book of the chants she’s pieced together through her research. It’s a scholarly pursuit, but also a personal one.

“That’s one reason I appreciate the Institute for Advanced Study so much, because they don’t need to draw distinction,” Hild says. “They’re looking for people who are doing academic work that can also make a contribution to contemporary society, so they respect the rigorous academic work that in itself is a type of calling.”

This is an excerpt from “Coda: Medieval Music at the End of Life,” written by Andy Fuller. Read the full story.

Originally published by Grant Osborn at ndias.nd.edu on August 22, 2018. Republished at medieval.nd.edu.