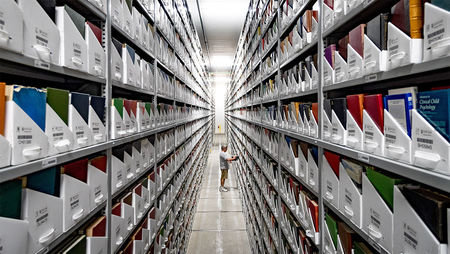 Old archivists cringe when they hear the word archive—or see it in print, or trip over it as they browse the internet. In my own training as an archivist I learned that the word, a noun, signifies a single document kept in an archives.

The word archive does not appear in the dictionary I had to buy in high school, Webster’s New World Dictionary of the American Language (Cleveland and New York, 1964). In the New World, we know better than to omit the “s.” And we would never use archive as a verb. The Shorter Oxford English Dictionary (1973, first published in 1933) has the word archive but not archives. However, definition number one adds “Now only in pl.” The 1971 edition of the unabridged Oxford English Dictionary begins its definition of archive with “Mostly in pl.”

Dictionaries from both Old World and New identify archives as a plural noun. But it belongs to that odd category of plural nouns that can take singular verbs. Biblical scholars think of Elohim. English speakers who once studied Latin think of agenda. At Notre Dame, the archives is on the sixth floor of Hesburgh Library. There data is preserved by the archivists. Or must we say data are preserved?

For those who have not fallen asleep during this discussion, I recommend as bedtime reading the Glossary of Archival and Records Terminology from the Society of American Archivists (SAA). If you make it wide awake through most of the letter A, all the way to the entry for archive, you will find a definition interesting enough to keep you reading. Four of the meanings there come from the world of computers and only two from archival usage. The first of these is the verb that makes old archivists cringe. In definition number three archive as a noun is defined as “An archives.”

Still nodding off? Read the notes and citations associated with the definition. In the notes we learn: “United States and Canadian archivists generally deprecate the use of ‘archive’ (without an s) as a noun to mean a collection of records (‘archives’), but that form is common in other English-speaking countries. In information technology, the s-less form, ‘archive,’ is commonly used as a verb and to describe collections of backup data.”

In the citations, the Glossary quotes to the brink of fair use from remarks made by William Maher in 1997, mentioning “tendencies to use the word ‘archive’ minus its North American requisite ‘s’ and to ‘verbify’ the noun” and saying “In many cases, the nonprofessional appropriation of the term ‘archives’ appears to be part of an attempt by the scholar or database builder to lend panache or cachet and an air of respectability to what otherwise might be little more than a personal hobby or collecting fetish. As archivists, should we simply welcome this popularization of the term ‘archives’ or should we be bothered by the prevalence of its frequent misuse?” (William J. Maher, “Archives, Archivists, and Society,” American Archivist 61, no. 2 (1998): 252–265. Incoming presidential address delivered August 30, 1997, at the annual meeting of the Society of American Archivists.)

Whatever the emotional response of old archivists, languages change according to the way people actually use words. You can’t step twice into the same English. A second look at the OED shows that people have been saying “archive” since the 17th century. In the 21st century, information scientists don’t care if old archivists cringe. I suspect that young archivists don’t care either.

Nevertheless, I count it as a victory that in developing the Hesburgh Portal at Notre Dame we successfully resisted attempts to call it the Hesburgh Archive. I don’t want to criticize websites that appropriate the term archive, but perhaps I can achieve the same effect by saying why the Hesburgh Portal does not qualify as an archive.

Archives preserve records according to professional standards that protect the integrity and neutrality of the evidence. Websites that exhibit selected archival documents represent the ideas of their developers. They resemble anthologies of documents chosen to support a certain interpretation. The Hesburgh Portal presents Father Hesburgh as a hero. By design, it includes many links to resources in the Notre Dame Archives. But it presents only a tiny percentage of the Hesburgh documents in the archives. It includes only documents selected to interest the general public and to celebrate the life and heritage of a great man. Anyone seriously interested in studying him should not rely on this exhibit but should do research in the archives.

With terms such as papers and collections we could probably use more help from the SAA Glossary, but in the limited space available let me say only that papers can include manuscripts, photographs, printed material, microfilm, and media that have nothing to do with paper—audio recordings, videos, artifacts, digital data. The word collections can appear in archival discourse as the most general term, including both archives strictly defined and other records held by an archival repository. But it can also be used to distinguish artificial collections, such as stamp collections or autograph collections, from records that grow organically and provide evidence in the very structure of the original filing system. Librarians generally talk about their collection (singular), though they also recognize special collections, which they may sometimes call archives.

Many online exhibits of documentary material deserve high praise even if they inappropriately appropriate the word archive. Let me conclude by drawing attention to one such resource. The Catholic Research Resources Alliance has developed and continues to improve The Catholic News Archive. Here Catholic newspapers once relegated to the morgue, resurrected through digitization, can be searched and read freely by scholars anywhere in the world. Morgue? What a great term. Maybe they should call it the Catholic News Morgue. Or would that make coroners cringe?

P.S. I retired at the end of June. But the Notre Dame Archives shows every sign of surviving in spite of my departure. Email archives@nd.edu, or ask for Angela Fritz, the head of the archives.

Kevin Cawley retired in June 2019 from his role as senior archivist and curator of manuscripts at the Archives of the University of Notre Dame, after 36 years of service. This piece appears in the fall 2019 issue of the American Catholic Studies Newsletter.

Originally published by Wm Kevin Cawley at cushwa.nd.edu on September 30, 2019.