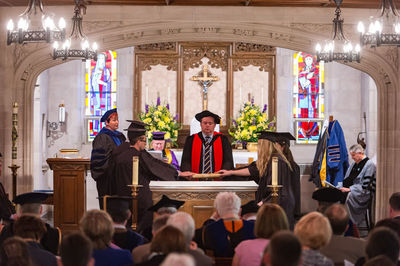 Each year the Medieval Institute conducts an intimate, all-Latin graduation ceremony in the atmospheric Alumni Hall Chapel. This year’s ceremony took place on May 18th; in it the Institute admitted to the Medieval Studies Minor Marcus Timothy Haworth, to the Supplementary Major John Edward Norton, to the Major Mark E. Florig and Erica Sestak, and to the Major with Honors Harriet Elizabeth Fink, who was also awarded the Robert M. Conway prize, an annual award presented to a graduating senior for an outstanding essay on a medieval topic.

Faculty presiding over the ceremony were Thomas E. Burman, Director of the Institute, as Officiant; Rev. Michael S. Driscoll as Proctor and Chaplain; Alexander Blachly as Proctor and Director of Music; Christopher Abram as Beadle; Daniel Hobbins as Cantor; and Hildegund G. Müller as Praelectrix.

Following the ceremony, the graduates, together with their friends, family, and colleagues, enjoyed a reception of cookies and lemonade in the Oak Room of the South Dining Hall. The Institute congratulates all of these fine scholars on their hard work and achievements, and wishes them every success.