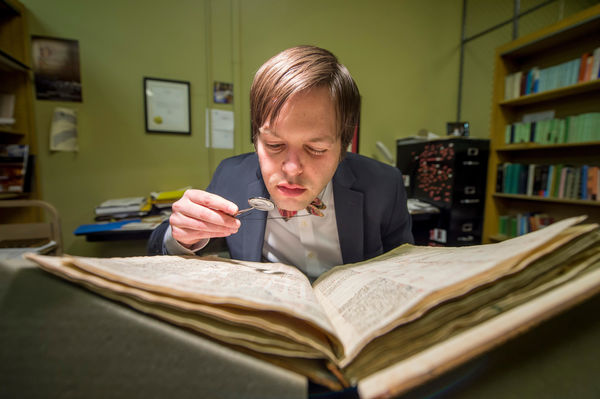 When Dr. David T. Gura was hired in 2010 and began using the first catalog of the Notre Dame manuscript collection, compiled by Prof. James A. Corbett, a Notre Dame medievalist, he found that he had his work cut out for him:  "[The Corbett catalog] just didn't tell you what you wanted to know. There was no codicological or paleographical information at all, basically only some measurements, indications whether it was parchment or paper, and description of contents. At times there were transcription errors, and the bibliography [and several attributions were] out of date."

In 1935 the library held just four manuscripts—and one was miscatalogued as a printed book. Between 1959 and 1968, at least forty-eight new manuscripts were added, with the help of Canon Astrik Gabriel, director of the Medieval Institute from 1952 to 1975. It was at this point that Corbett produced his 1978 catalogue. Acquisition slowed significantly between 1978 and 2000, during which only three additional manuscripts joined Special Collections. In 2010, though, in large part due to the initiative of Dr. Gura, regular acquisition resumed, and since his arrival at Notre Dame, Gura has helped purchase thirty-one codices and approximately 175 fragments. All of these new acquisitions needed to be described and catalogued and Corbett's entries on current holdings corrected and expanded. Gura had done some of that work and made much of that information available online via the webpage for Medieval Manuscripts in Hesburgh Library Special Collections. But it soon became apparent that more work needed to be done. "It doesn't matter what you put online. If people can't cite it easily, they are not going to use it. So I figured this [catalog project] would be a great thing since a part of my job in the library is to work with our own collection. So I undertook a research program that was interesting to me and which benefited the Library as a whole. And I just kept buying manuscripts." 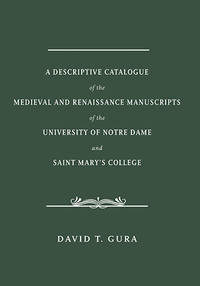 In his graduate formation in Classics at Ohio State University, Gura trained with the renown codicologist Albert Derolez and paleographer Frank. T Coulson. During his time there, he had seen well over 500 manuscripts not counting those on microform or in other media, so Gura had been well prepared for this endeavor. The new catalog, the result of nearly seven years of manuscript hunting, study, description and analysis, is a one-of-a-kind scholalry enterprise. His innovative and meticulous work catalogs the 288 medieval and Renaissance manuscripts held by the University of Notre Dame (Hesburgh Library and Snite Museum of Art) and Saint Mary’s College. It also includes scale diagrams of every ruling pattern for every manuscript along with a "sliding schematic" that highlights the common characteristics of each document as well as the unique features that distinguish it from its genre. This volume has set the bar for future projects of this sort in any major manuscript collection, and in the words of one of its reviewers, "it represents the future of manuscript taxonomy."

When asked what kept him motivated to continue such a significant but daunting task over the course of over six years, he simply relied: "I just love manuscripts, I really do. It was an amazingly trying and difficult experience but also extremely rewarding because it really pushes you. I liked the challenge. It's fun for me." As was Prof. Corbett's 1978 catalogue, Gura's new catalogue is published by the University of Notre Dame Press; copies can be purchased online.

This outstanding new catalogue was officially launched this past Tuesday evening, February 28th, to a standing-room-only audience. Diane Parr Walker, Edward H. Arnold University Librarian; Rev. William M. Lies, C.S.C., Vice President for Mission Engagement and Church Affairs; and Prof. Tom Burman, Robert M. Conway Director of the Medieval Institute, all gave opening remarks. They universally praised the careful thoroughness of Gura's catalogue. Gura spoke on the history of Special Collections at Notre Dame and the genesis and development of his catalogue, showing a number of fascinating examples of manuscripts in the collection. Everyone looks forward to the future publications resulting from this project and the supplement to his volume Gura already has in the works.