The first written description of the personal appearance of the Vikings comes from a letter written by tenth-century English abbot Ælfric of Eynsham:

("I say likewise to you, brother Edward…that you do unrightly when you forsake the English customs which our fathers held and hold dear the customs of heathen men…and by that make manifest that you scorn our kind and our forefathers with that evil practice by which you, to their shame, dress yourself in Danish fashion, with bald neck and blinded eyes.") 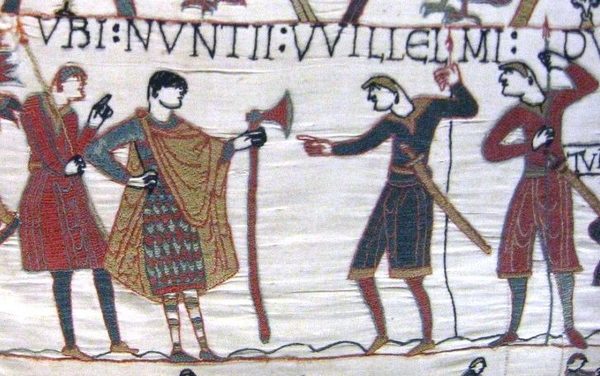 Shaved necks and blinded eyes on the Bayeux Tapestry. Image in the Public Domain.

The verb ablendan means “to blind,” and the long bangs hanging onto the foreheads and perhaps impeding the vision of certain warriors on the eleventh-century Bayeux tapestry might explain these “blinded eyes.” Other options for this “blinding” hinge on the description of the inhabitants of the city of Shalashwīq (Hedeby) given in the later tenth century by Ibrāhīm ibn Ya’qūb al-Isrā’īlī al-Turtūshī, a native of the Cordoban city of Tortosa, who noted that “both men and women [there] use a kind of indelible cosmetic to enhance the beauty of their eyes."

Speculation based on this and similarly loose translations has suggested white lead or even eye drops containing the alkaloid atropine, a compound present in deadly nightshade and henbane, as the “indelible cosmetic” ...

This is an excerpt from “Viking Eyeliner from Sea to Sea” written by Medieval Institute Ph.D. Candidate Rebecca West. Read the full story.