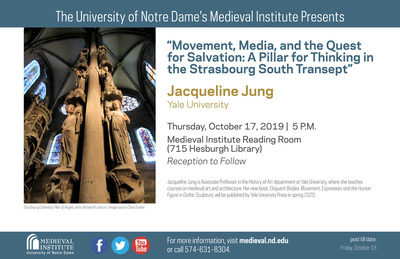 On Thursday, October 17, the Medieval Institute hosted Jacqueline Jung, Associate Professor in the History of Art department at Yale University, to deliver a talk entitled “Movement, Media, and the Quest for Salvation: A Pillar for Thinking in the Strasbourg South Transept” to a large and enthusiastic audience.

A dynamic scholar of medieval European art and architecture, Jung explored the theological implications of those disciplines in a rigorous yet accessible manner. In particular, she discussed the historiated pier in the center of the south transept at Strasbourg Cathedral, described by Jung as one of the most magnificent and complex monuments of integrated sculpture and architecture in early thirteenth-century Europe.

Though traditionally known as the “Pillar of Angels” or “Pillar of Judgment,” the monument’s meaning exceeds the iconography of its imagery. It was designed to resonate with liturgical objects and activities in its space, with imagery in other media there (such as stained glass), and with other sculptural works in its vicinity. Operating within a zone of human circulation, the pillar becomes a mechanism for contemplating the self in relation to the divine. More specifically, the pillar was designed to be viewed from different angles, each inspiring different modes of contemplation.

In addition to discussing the pillar itself, Jung discussed previous scholarship on the pillar and how a tradition of making and manipulating images of the pillar and other artwork in the church impacted and the ways in which those images were used to create particular cultural and political narratives.

Professor Jung followed her lecture with a graduate seminar the next day.

Her new book, Eloquent Bodies: Movement, Expression, and the Human Figure in Gothic Sculpture, will be published by Yale University Press in spring 2020.

Keep an eye on our events feed for notices of upcoming lectures and other Medieval Institute events.