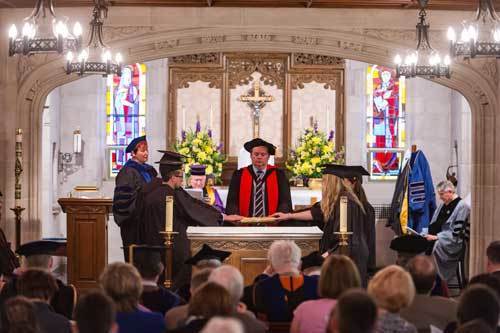 Faculty presiding over the ceremony were Thomas E. Burman, Director of the Institute, as Officiant; Rev. Michael S. Driscoll as Proctor and Chaplain; Alexander Blachly as Proctor and Director of Music; Daniel Hobbins, Medieval Institute Director of Graduate Studies, as Beadle; and Hildegund G. Müller as Praelectrix.

Due to the wet weather, friends, family, and graduates enjoyed a reception afterward of cookies and punch in the Oak Room of South Dining Hall. The Institute congratulates all of these fine scholars on their hard work and achievements and wishes them every success.