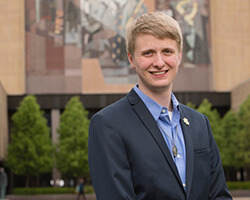 Who is Mary, and what does she mean for us? How has her role developed over time? Luke Donahue ('17), a Medieval Studies minor, received a Break Travel and Research Grant for Sophomores and Juniors from the Nanovic Institute for European Studies to examine these questions by going back in time to a small but noteworthy cloister in medieval Germany. Luke wrote about his experience:

The Pütrich Regelhaus was a very famous and influential cloister in Munich, in operation from the late Middle Ages through the early modern era. It was well endowed by the Pütrich family, a rich and important bourgeois family in Bavaria, and many sisters came from wealthy families and brought books with them. This left the cloister with a very large collection of devotional and scholastic texts. Many of these, influenced by the Franciscan spirituality of the cloister, have a deep Marian flair. These texts were used for both liturgical and private devotion within the house. The impact of these scripts, however, was not limited to the cloister. For a time, the Regelhaus allowed sisters to leave to get married, the sisters then taking with them the spirituality of the Pütrich Regelhaus and bringing it into the world. Additionally, as the cloister’s rules changed over the centuries, many sisters left for other cloisters. This allowed the Pütrich Regelhaus an invaluable role in spreading their devotions to both the laypeople and the fellow religious in the greater Munich area. My time in Munich sponsored by the Nanovic Institute had two purposes: to transcribe some of these manuscripts from the Pütrich Regelhaus and to begin primary historical theological analysis of them. My research begins to answer the question: “Who WAS Mary to these sisters?” To what extent is the Mariology practiced by the sisters in the Pütrich Regelhaus linked with their Christology? How do these sisters view Mary’s roles as Mother of God, Queen of Heaven, and Mother of Mercy, and how do these effect their devotional practices? What do their beliefs about Mary’s earthly and heavenly life imply about their theological anthropology? I later intend to trace the paths of the manuscripts and see how the Regelhaus effected the devotions of the surrounding area. This research will allow us to better understand Bavaria, the Middle Ages, and the Catholic Church. The results will also allow for further reflection: what can we learn from these sisters and apply to our modern devotional practices? 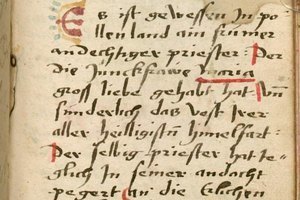 Some research has been done on the Pütrich Regelhaus, but most of the research that has been done on the cloister has been with regard to the history and rules of the cloister. These aspects are very important for a cloister; indeed, the rule is the very foundation of the ordered life. Its ultimate goal, however, is to lead those who practice it to a greater prayer life. The only significant research that has been done in the realm of the sisters’ spirituality is with regard to the art in the cloister, leaving the almost 90 currently catalogued books attributed to the Regelhaus practically untouched. My research into the spiritual books at the end of the Middle Ages will thus begin to fill this gap. Such work can then be used for historical theological analysis of Bavarian cloisters, medieval theology, and the spread of specific devotions. It can also contribute to research for the formulation of systematic treatises on certain Marian devotions, such as Mary Queen of Heaven or Mary Auxiliatrix.

At the beginning of my time in Munich, I searched the Bavarian State Library (BSB)’s manuscript catalogs and other catalogs specific to the Pütrich Regelhaus in order to locate manuscript material that pertained to Marian devotion, whether directly or indirectly. Then, while in the manuscript room in the BSB, I began to transcribe the texts (which are written in medieval scripts) to allow for deeper reflection on them. The amount of material I have transcribed until now amounts to approximately 500 pages of both primary theological texts (prayers) and secondary theological texts (explanations of prayers, sermons, etc.). When I was not at the library, I spent time reflecting on the material that I had transcribed and beginning a primary theological analysis: what do the titles and key words used to describe Mary imply about what the sisters in the Pütrich Regelhaus thought of her? Why are certain phrases used more often than others? What themes are common in these works?

This preliminary reflection has led me to conclude that, in the Regelhaus, Mary served a prominent role. She was more than just the most powerful intercessor before her Son, or the perfect example of the role of the human person with respect to the divine. Rather, she was also an agent who could directly pour forth graces upon the sisters. Physically, she could help them live chastely or do their work. Spiritually, Mary could help the sisters to have a good confession or to be constant in their faith, especially at the hour of their death. Additionally, she allowed for a greater contemplation of some of the deepest aspects of the Christian Faith. Not only could the sisters ponder her humanity to reinforce the understanding of the Incarnation, but Mary could also provide the sisters with her experiences. This belief in Mary’s ability to come to our aid resulted in a number of petitions imploring Mary’s help, including an act of Total Consecration. 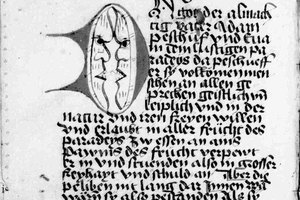 My research grants a basic understanding of the Marian devotions of the Pütrich Regelhaus. While it examines the devotions of these sisters, however, it also has a much broader impact—it will increase our understanding of Bavaria, the Franciscan Order, and the Middle Ages. Additionally, this project will provide modern theologians more material to help understand some of the central-most mysteries of the Christian Faith such as the Incarnation, the Eucharist, and the role of the human person with respect to the divine.

I would like to express my deepest appreciation to the Nanovic Institute for European Studies and the Glynn Family Honors Program for their roles in sponsoring this research. In so doing, they have granted me the opportunity both to improve my reading skills of various late medieval German scripts and dialects and to learn more about medieval Germany, Theology, and Marian Devotion. I intend to use the research in which I engaged under their sponsorship of Nanovic and Glynn as the foundation for two senior theses. The first one, which I will write for the German department, will be a historical analysis of the Regelhaus, while the second one, which I will write for the Theology Department, will be a theological analysis of the texts of the manuscripts themselves. My theses will help me prepare for my time after graduation, when I aspire to be able to do more research into medieval German Mariology on a Fulbright or DAAD grant and thereafter enter graduate school for further studies in German or Theology. Eventually, this will allow me to become a professor and engage in professional academic research, likely retaining Mariology as my concentration.

Luke developed this research into his undergraduate thesis, “Writing of Paradise: The Marian Prayers Composed by the Franciscan Tertiary Sisters of the Pütrich Regelhaus Found in Cgm 4484 and Their Historical Context.” For his work, he was awarded an Honorable Mention in the senior/honors thesis category of the Undergraduate Library Research Award (ULRA), which honors individuals who conduct original research and demonstrate exemplary skills through their broad use of library resources, collections and services for their scholarly and creative works. Sponsored by the Hesburgh Libraries and the Flatley Center for Undergraduate Scholarly Engagement, with support from other campus entities, the ULRA provides students with a network of support and offers inspiration to those beginning original research or capstone projects. Donahue, a German and theology double major with minors in Medieval studies and the Arts and Letters Honors Program, was advised by Claire Taylor Jones, assistant professor of German.

Donahue’s personal goal has been “to contribute to filling the scholarly gap by writing a senior thesis on medieval theological manuscripts” since his first year when Rare Books and Special Collections curator David T. Gura allowed him to hold and then practice reading manuscripts. Donahue noted, “Dr. Gura planted a seed that developed into my senior honors thesis. Having the chance to see and hold these great artifacts lit a fire in my soul.”

Since that time, whether on campus or abroad, Donahue continued to access a range of library resources and digital collections. “The Medieval Institute on the seventh floor of Hesburgh Library was essential to my research, as were the library’s theology and reference collections. The library provided well-trained librarians and curators who were willing to work with me and assist in my research.”