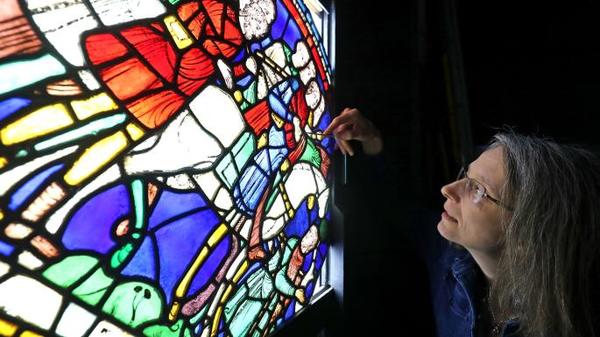 Rachel Koopmans (Ph.D., '01), subject of our Spring 2019 alumni spotlight, has made the news once again with her tremendous work on the stained glass windows of Canterbury Cathedral: she has been featured this fall in York University Magazine.

Koopmans first encountered the windows in the Canterbury Cathedral when she was working on her dissertation, “Dispute, Control and Individual Voice: The Making of Miracles at Christ Church, Canterbury, 1080-1220,” under the direction of John Van Engen here at the Medieval Institute; she subsequently published that work as Wonderful to Relate:  Miracle Stories and Miracle Collecting in High Medieval England with Penn Press in 2011. The book then won the 2012 Margaret Wade Labarge prize from the Canadian Society of Medievalists.

For Koopmans, the stained glass windows of Trinity Chapel in Canterbury Cathedral contained the discovery of a lifetime. The chapel was built between 1179 and 1184 as a shrine to Archbishop Thomas Becket. Like many cathedrals at the time, Canterbury Cathedral was decorated with numerous stained glass windows that depicted miracle narratives and, in the case of Trinity Chapel, portrayed travelers coming to the chapel on pilgrimage (a journey made particularly famous by Chaucer in his Canterbury Tales).

Among a cluster of windows long assumed to be the work of Victorian-era restorers, Koopmans discovered that one of the windows was, in fact, made in the 1180s, within fifteen years of Thomas Becket’s martyrdom. The window, labeled nV, depicts a group of pilgrim travelers headed to Canterbury.

Koopmans made the discovery after noticing inconsistencies in published descriptions of the window. During her investigation into the window, Koopmans found photographs of the cathedral, dating to the 1860s, in which the window was visible. The photographic evidence precludes the Victorian period as a possibility for the window, and further scientific analysis confirmed that the glass dated to the late twelfth century.

Koopmans’ discovery has garnered international attention from media outlets such as the BBC and The Sunday Times.