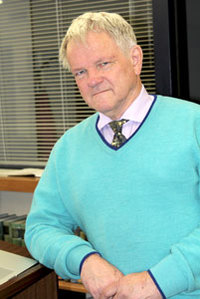 The Medieval Institute was pleased to welcome guest speaker Peter Robinson, Bateman Professor of English at the University of Saskatchewan. On Thursday evening, October 27th, Robison gave a rich lecture entitled “The Text of the Canterbury Tales in the 21st Century.” The lecture began with a history of the various editions of the Canterbury Tales, beginning with the first comprehensive edition produced in 1940 by John Matthews Manly and Edith Rickert over the course of sixteen years. In the wake of the digital revolution in the 1990s, Prof. Robinson and his colleagues sought to create an edition using all 88 of the pre-1500 manuscripts and incunables of the Tales and make it available on a digital platform: hence, Canterbury Tales Project II. The rest of the lecture featured a history of the "CTP2" initiative, a description of its methodologies, as well as an update on the current state of Digital Humanities as related to the Canterbury Tales corpus. Prof. Robinson hopes that the CTP2 will serve as model for similar initiatives to edit works with large manuscript corpora.

In Friday's seminar, Prof. Robinson introduced students to Dante Alighieri: Commedia. A Digital Edition, a digital initiative on which he has worked as long-time collaborator with its director, Prue Shaw. The extended discussion of the Commedia Digital edition provided students with a more in-depth understanding of the challenges of editing a large medieval textual corpus and how phylogenetic analysis, a method borrowed from the biological sciences, has been adapted to fit the needs of textual editors. Prof. Robinson concluded his seminar by inviting graduate students to assist in the digital editing for the Canterbury Tales Project 2--a pursuit that is, in fact, open to anyone interested. Would you like to become a transcriber for the project? Read more on the CTP2 website.