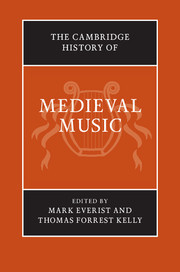 Peter Jeffrey and Margot Fassler both have chapters in the just appearing Cambridge History of Medieval Music (edited by Mark Everist and Thomas Forrest Kelly), Cambridge University Press, 2018. Professor Jeffrey’s chapter, the first in the book, is entitled “Musical Legacies from the Ancient World.” It explores the streams of influence that shaped the beginnings of musical practices in the West, including ancient Greek music theory, the Judeao-Christian Bible, and the early Christian liturgy in Jerusalem. Fassler’s chapter, “Music and Prosopography,” describes a variety of methods for uncovering details about the lives of medieval musicians and communities of song. The essay examines sources from many regions of Europe, and looks at individuals from the Carolingian period through to the fifteenth century. The book has appeared already in England and will be released in the USA in September 2018.

Originally published by Margot Fassler at sacredmusic.nd.edu on September 10, 2018. Published with edits at medieval.nd.edu on October 22, 2018.