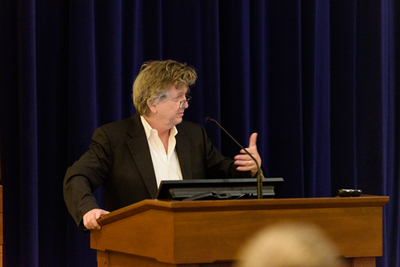 In 2002, the Medieval Institute inaugurated a lecture series in honor of Robert M. Conway, a 1966 graduate of Notre Dame, trustee of the University, and long-time friend and supporter of the Medieval Institute. The annual Conway Lectures bring senior scholars of international distinction to Notre Dame each fall to speak on topics across a variety of disciplines; the three-lectures series offers an opportunity for exploration of these topics over the course of several days rather than in a single lecture. The lectures are then published by the University of Notre Dame Press.

The Medieval Institute was pleased to welcome as this year’s Conway Lecturer Niklaus Largier, Professor of German and Comparative Literature at the University of California Berkeley. He has published on medieval mysticism, the history of ascetic practices, prayer, and ascetic experience. His books include an edition of the works of Meister Eckhart (Deutscher Klassiker Verlag, 1993) and In Praise of the Whip: A Cultural History of Arousal (Zone Books, 2007). In his 2018 Conway Lectures, collectively entitled “The Rhetoric of Mysticism," he explored how Christian mystics engaged with rhetorical methods, theological concepts, and prayer practices through their writings. 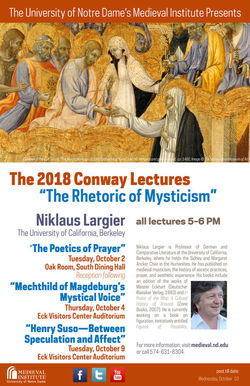 On Tuesday, October 2, Largier presented his first lecture, “The Poetics of Prayer.” Here Largier introduced the audience to the medieval German mystic Mechthild of Magdeburg and her work The Flowing Light of the Godhead.  Largier explored how Mechthild crafted her mystical work as a form of “pure prayer.” The work’s descriptive language and affective imagery, he argues, continually pull the reader to a state of prayer focused on the emotions and sensory images it invokes.

Largier continued his exploration of mystical texts on Thursday, October 4, with his second lecture, “Mechthild of Magdeburg’s Mystical Voice.” Largier returned to The Flowing Light of the Godhead in order to examine Mechthild’s self-portrayal therein. This talk proved a testament to Largier’s insightfulness as he skillfully demonstrated the theological exercise embedded in Mechthild’s dialogue with God. As Mechthild talked with God in her writing she explored what it meant to talk to God and to claim simultaneously that the Holy Spirit guided her words.

Largier concluded the lecture series on Tuesday, October 9, with his talk, “Henry Suso—Between Speculation and Affect.” This final lecture left behind Mechthild of Magdeburg in order to explore other examples of her rhetorical style in medieval writings, focusing particularly on the writings of the Dominican friar Henry Suso. According to Largier, Suso attempted to reform the prayer habits of the Latin church. Suso used affective language similar to Mechthild’s to guide his reader towards prayer which praised God and away from petitionary prayer. Suso’s similarities to Mechthild allowed Largier to end his lecture series by tying the subject of his first two lectures into a broad literary movement of the Middle Ages.

The Institute thanks Professor Largier for offering this skillful examination of mystical writings to our community, and we look forward to seeing his lectures in print as a monograph in the Conway Lectures Series from the University of Notre Dame Press.

Read more about this lecture series and the associated publications.