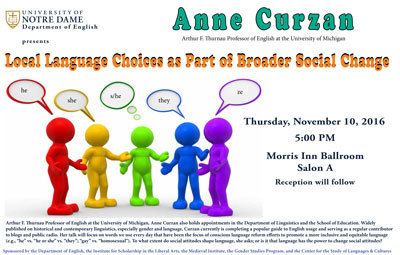 The English Department presents a lecture by Anne Curzan. Arthur F. Thurnau Professor of English at the University of Michigan, Curzan also holds appointments in the Department of Linguistics and the School of Education. Widely published on historical and contemporary linguistics, especially gender and language, Curzan currently is completing a popular guide to English usage and serving as a regular contributor to blogs and public radio. Her groundbreaking Gender Shifts in the History of English (Cambridge University Press, 2003) traces the inherently shifting patterns of grammatical and natural gender usage in English, while her recent Fixing English: Prescriptivism and Language Change (Cambridge University Press, 2014) unpacks bromides about the decline of English language usage by reading them against both social anxieties and the specifics of natural language change.

Her talk at Notre Dame is entitled “Local Language Choices as Part of Broader Social Change.” Politically correct (or “PC”) language has acquired negative connotations over the years: it is sometimes dismissed as “silly” or as “threatening” or as not really addressing the underlying social issues. Yet we probably all agree that at the most fundamental level, language matters. Words may not break our bones, but they have great power and can do real harm. So does that mean that every language choice we make, no matter how small and how local, matters? This talk will focus on words we use every day that have been the focus of conscious language reform efforts to promote a more inclusive and equitable language (e.g., “he” vs. “he or she” vs. “they”; “gay” vs. “homosexual”). To what extent do social attitudes shape language—or is it that language has the power to change social attitudes? It’s a difficult question but an important one for all of us to consider as speakers and writers.

The talk has been made possible by support from the Institute for Scholarship in the Liberal Arts, the Department of English, the Gender Studies Program, the Center for the Study of Languages and Cultures, and the Medieval Institute.