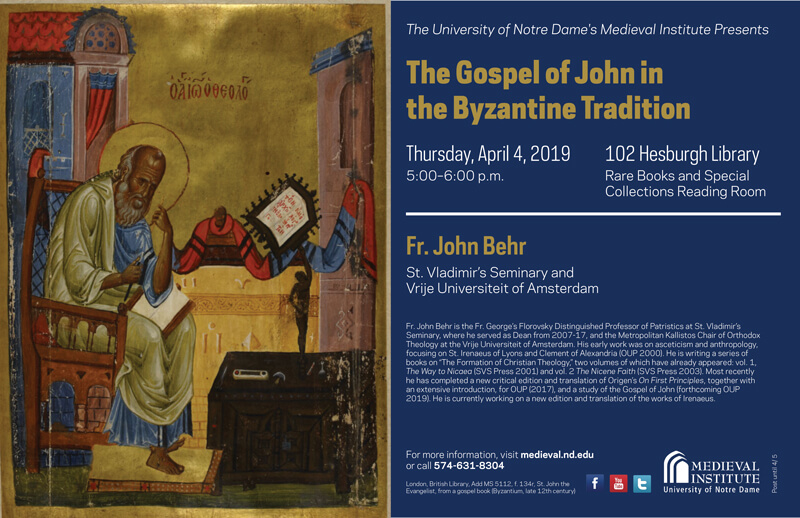 Fr. John Behr is the Fr. Georges Florovsky Distinguished Professor of Patristics at St. Vladimir’s Seminary, where he served as Dean from 2007-17, and the Metropolitan Kallistos Chair of Orthodox Theology at the Vrije Universiteit of Amsterdam. His early work was on asceticism and anthropology, focusing on St. Irenaeus of Lyons and Clement of Alexandria (OUP 2000). He is writing a series of books on “The Formation of Christian Theology”, two volumes of which have already appeared: vol. 1, The Way to Nicaea (SVS Press 2001) and vol. 2 The Nicene Faith (SVS Press 2003). On the basis of these two volumes, he published a synthetic work, The Mystery of Christ: Life in Death (SVS 2006). This was followed by an edition and translation of the fragments of Diodore of Tarsus and Theodore of Mopsuestia, setting them in their historical and theological context (OUP 2011). More recently Fr. John published a more poetic and meditative work entitled Becoming Human: Theological Anthropology in Word and Image (SVS Press, 2013) and a full study of St. Irenaeus: St. Irenaeus of Lyons: Identifying Christianity (OUP, 2013). Most recently he has completed a new critical edition and translation of Origen’s On First Principles, together with an extensive introduction, for OUP (2017), and a study of the Gospel of John (forthcoming OUP 2019). He is currently working on a new edition and translation of the works of Irenaeus.