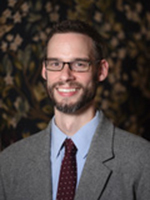 Since 2001, the Medieval Institute has offered the A. W. Mellon Junior Faculty Fellowship in Medieval Studies to one outstanding early-career scholar each year. The Fellowship allows a junior faculty member who holds an assistant professor position at a United States university to spend a full academic year in residence at Notre Dame, researching and working on their first book.

Our 2018-19 Mellon Fellow is Stephen Ogden, Assistant Professor of Philosophy at the Catholic University of America. Ogden received his Ph.D. in Philosophy from Yale in 2015. His book manuscript is entitled Receiving and Making Aristotle's Intellect: A Study on Ibn Rushd and Aquinas. "The book project," Ogden explained, "is on Averroes (Ibn Rushd, d. 1198) and Thomas Aquinas (d. 1274) and their competing views of the nature of intellect, primarily whether there are many intellects (individualized powers within each human soul, i.e., Aquinas’s view) or whether there is only a single intellect shared by all human beings (i.e., Averroes’s view).

"This was a debate not only about how to interpret Aristotle’s infamously dense and, therefore, incredibly elastic theory of intellect, but also about what further, independent philosophical arguments could secure regarding intellect and its objects. In the book manuscript, I argue for a great deal of agreement between these thinkers, including in their basic strategy for interpreting Aristotle’s doctrine of intellect in the latter’s De anima. I also devote attention to each thinker’s most important philosophical arguments and corresponding objections."

"I am so grateful that each of these experts made time for my project. This kind of feedback is as priceless as it is rare for a junior scholar working on a first book manuscript."

On March 25, 2019, Ogden presented his work in progress at the annual Mellon Colloquium. The Colloquium is not only an opportunity for each Mellon Fellow to share his/her/their scholarship with the Notre Dame medievalist community but an opportunity for the Fellow to receive detailed feedback in return. Senior scholars are invited who carefully read the book draft and present their comments at the Colloquium, and who offer the Fellow more detailed feedback one-on-one. This year, the discussants were Thérèse Cory (John and Jean Oesterle Associate Professor of Thomistic Studies at Notre Dame); Stephen Harvey (Professor Emeritus of Philosophy at Bar-Ilan University); Christopher Shields (George N. Shuster Professor of Philosophy at Notre Dame); and Richard Taylor (Professor of Philosophy at Marquette). 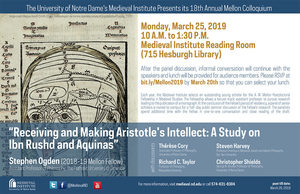 Of this process, Ogden said, "The panelists’ feedback has been incredibly beneficial and wide-ranging: from macroscopic questions about the book’s main aims, to complex arguments about each thinker’s epistemological suppositions, to structural and stylistic details. The four panelists pinpointed distinctly interesting and clarifying aspects with respect to the project. I expected this to some degree (given their varying areas of expertise), but it proved profoundly intriguing and salutary as their specific points came to light during the colloquium. Not to mention extensive written notes from and further meetings with several of the panelists since the colloquium. I am so grateful that each of these experts made time for my project. This kind of feedback is as priceless as it is rare for a junior scholar working on a first book manuscript."

In addition to the panelists’ feedback, Ogden cited other benefits of the Mellon Fellowship. “Notre Dame and the Medieval Institute have proven uniquely valuable for me and my work,” he said. Of especial note were the Medieval Institute library and its resources, the presence of a stimulating Aquinas reading group, and the opportunity to converse with other scholars—Cory and Shields, of course, but also those from other disciplines, such as history and theology, “all brought together through the MI as a single intellectual hub.”

And, naturally, the Fellowship allowed him the time and freedom to research and write. The result was a manuscript praised by Richard Taylor as “precisely what we need now.” The work, said Stephen Harvey, is a long-needed re-examination of Averroes' commentary on Aristotle, which is often ignored by contemporary philosophers, despite the availability of Averroes' writings in translation. “Ogden has beautifully exploded the traditional reading of Averroes," said Thérèse Cory.

Read more about our past Mellon Fellows and their research.

Learn more about the Mellon Fellowship, including eligibility and application procedures.