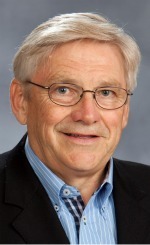 I first walked into the reading room of the Medieval Institute in February 1977 when I was being interviewed for a position in the History Department. I saw before me, in one room, all the books I had used to write my dissertation, and many more. My eyes flew too to the city-scape of Cologne, not for its churches or streets but its depiction of Deutz just across the Rhine. Over the past three years I had been writing a thesis on a prolific monk named Rupert who spent his last decade as abbot of St. Lambert in Deutz. The History Department was then replacing its one medieval historian, and I was one of four candidates. For nearly forty years, a bit earlier, James Corbett had held that position, an American trained at the Institut des Chartes in the 1930s, an editor of texts, and the first cataloguer of Notre Dame’s manuscripts. The Medieval Institute too was undergoing a transition following the retirement of Canon Astrik Gabriel, also trained partly in Paris. At Fr. Hesburgh’s bidding he served as its formative director for fully twenty-five years, making an indelible impact in countless ways, to the present. For myself, seeking my first job at a time almost as hard as the present, I could imagine being quite happy working in that room--though the signals that day suggested the appointment would likely not go my way. As things turned out it did, happily. Less than a decade later, in 1986, I entered the Institute again, as its director, and would stay on for twelve years, two past my two five-year terms when transitions had again proved difficult. In 2014 I returned to the directorship a second time under tragic circumstances when, too soon, we lost our beloved director, Remie Constable. Now, today in fact, I walk out of the director’s office once again, this time permanently--though I fully intend to remain an active part of our medieval community for a long time still to come.

These are not easy times for the Humanities, as we all know. Yet I remain very optimistic about the future of Notre Dame’s Medieval Institute. It is an inestimable resource, unparalleled almost anywhere. Through the years we have now also built up considerable expectations that we will act as a leader, even the leader, in Medieval Studies in North America and beyond. Last year we met and reinforced those expectations when we hosted the Medieval Academy of America’s annual meeting, and welcomed double the number expected to attend while organizing a program marked throughout by very high quality. Among ourselves this past year, for the first time ever, we set out directions detailing a Strategic Plan with an expansive way forward. The next director, working with all of you, is positioned to take these suggestions in hand, adjust and modify them as need, and generate fresh momentum going into the future.

Some people have wondered aloud to me whether there is a place for interdisciplinary studies in an academic world marked by ever more entrenched and professionalized disciplinary societies, whether deep skills in language, editing, and manuscripts carry weight in a world focused on the present and the screen, whether our Institute’s historic place in the mission of this university has yielded to the ancient or contemporary church in the broad cultural shifts following Vatican Council II. But a Jesuit pope chose the name of St. Francis, manuscript studies are booming owing in part to a renewed sense of the particular, visual, and mobile character of texts brought by the web and screen, and the global problems of the present world make the deeper layers of culture and history over time and across space ever more vital to understand. Today’s Europe is not the Europe of the late nineteenth century, and likewise thirteenth-century Europe was not the same as seventh-century Europe. It is our job to bring fresh eyes and fresh ideas to the ever more expansive and varied world of the Middle Ages, then to make it comprehensible in forms that contemporary students, scholars, and a general public can engage with.

We have the great privilege, in my view, of studying that first thousand years formative in the making of Europe and the Mediterranean and the Middle East as they have now come down to, also a thousand years crucial in forming those religious cultures that together (Judaism, Western Christianity, Orthodoxy, Islam) make up today over half the world’s peoples. So our Medieval Studies too cannot be that of the 1890s or the 1930s or the 1950s, though we do well to learn from the best of what they did and to acknowledge our dependence in part upon it. Our Medieval Studies must transcend national politics or languages as well as confessional identities, while at the same time doing justice to traditions within which and from which people still live—including this university. Our Medieval Studies must learn to generate contributions that look longterm rather to five-year bursts of enthusiasms or fashions. Our Medieval Studies must reach out to all people including the many whose only images of the Middle Ages come from Tolkien or a clichéd Dark Ages, from video games or a TV series, and we should offer a richer and more substantial vision of its varied human, cultural, and religious landscapes. We are positioned here at Notre Dame, as nearly no one else, to do just that—and there are people eager to hear from us. But this requires genuine creativity as well as serious scholarly work, also cooperation among ourselves and our students across many different lines of time or language or discipline. We must be willing to move out of what materials we think we can control or what makes us feel comfortable. We must be specialists and generalists all at once. Such an enterprise of course requires support of all kinds if it is to materialize. I am wholly convinced that if we do our part, the University will in turn do its. Things can and will happen.

On a more personal note, finally and simply, thanks. The joy and grace of our profession lies in its people and its learning. At their best medievalists are often very learned, sometimes a bit quirky or obsessive or eccentric too, but this in pursuit of intellectual quests that have sustaining intellectual power and import, whether these be literary or religious or visual or philosophical or musical. Whence, I might add, contrary to expectation, their sense of the present too is often remarkably apt. Long may it be so, and especially here among us. Again, thanks to each for helping make it happen, and with my fond wishes that it will be even more so in the years ahead.