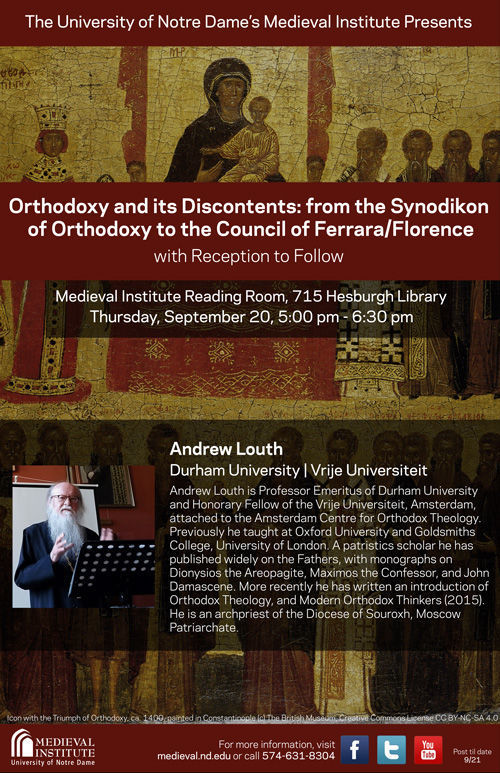 On Thursday September 20, the Medieval Institute hosted Fr. Andrew Louth as the first lecturer in the 2018-2019 Byzantine Lecture series.  Fr. Louth, an expert in patristics and byzantine theology, delivered a talk entitled, “Orthodoxy and its Discontents: From the Synodikon of Orthodoxy to the Council of Ferrara/Florence,” to a packed room of around 70 audience members.

Fr. Louth skillfully examined the development of the term “orthodoxy” as a label for the religious opinions of the Byzantine Empire.

According to Fr. Louth, the official use of 'orthodoxy' probably goes back to the Synodikon of Orthodoxy, issued in 843. This is on the one hand a liturgical proclamation made on the First Sunday of Lent and annually thereafter, and on the other a political document, issued by the Emperor.  Fr. Louth stressed that the Synodikon was primarily a performative text.  Every year church goers would participate in the recitation of the text in defense of “orthodoxy” and, by their participation, become complicit in the construction of “orthodoxy.”

The complexity of “orthodoxy” provided much fodder for Fr. Louth’s talk.  The Synodikon details what “orthodoxy” is not through the enumeration of multiple anathemas, but it never provides a positive definition of what “orthodoxy” is.  Moreover, the Synodikon is not a closed list; emperors added to the document as new heresies and conflicts arose.  Fr. Louth enumerated and examined the multiple difficulties that arise from the use of such a document to craft an “orthodox” identity.

Keep an eye on our events feed for notices of upcoming lectures in the Byzantine Series.

Andrew Louth is Professor Emeritus of Durham University and Honorary Fellow of the Vrije Universiteit, Amsterdam, attached to the Amsterdam Centre for Orthodox Theology. Previously he taught at Oxford University and Goldsmiths College, University of London. He has published widely on the church Fathers, with monographs on Dionysios the Areopagite, Maximos the Confessor, and John Damascene. More recently he has written an introduction of Orthodox Theology, and Modern Orthodox Thinkers (2015). He is an archpriest of the Diocese of Sourozh, Moscow Patriarchate.