On November 7th, 2019, in partnership with the University of Notre Dame, the Biblioteca Ambrosiana in Milan launched a new digital library. This new digital collection makes the main fonds of the library accessible to the public and will benefit scholars across various periods and disciplines. 243 high-resolution manuscripts are now available to the public, with more to come. The digital library currently includes manuscripts from the ninth to the seventeenth centuries in seven different languages: 164 in Latin, seventy-five in Classical Greek, twelve in Arabic, nine in Hebrew, seventy-one in Italian, one in Old French and one in Provençal.

The launch was celebrated with lectures by Professor Giuseppe Lupo (writer and professor at the Cattolica University) and Klaus Kempf (Director of the Digital Library in the Bayerische Staatsbibliothek München). The event was attended by Biblioteca Ambrosiana Prefect Marco Ballarini, Library President Professor Lorenzo Ornaghi, and colleagues from the library of the Università Cattolica del Sacro Cuore. 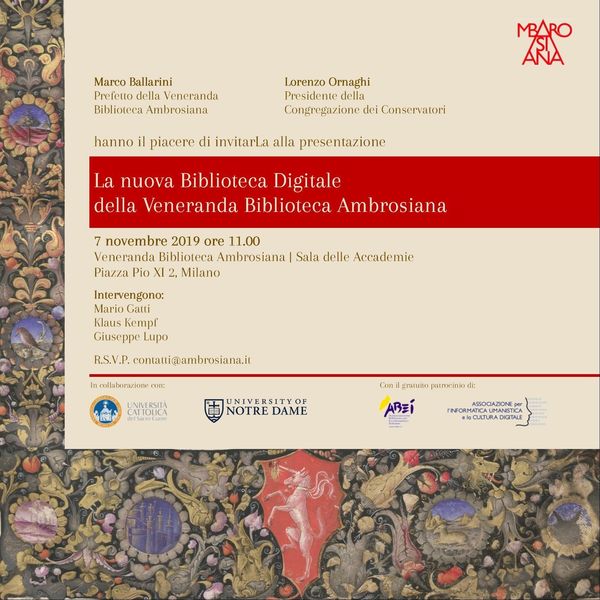 Founded in 1607 by Cardinal Federico Borromeo, Archbishop of Milan, the Biblioteca Ambrosiana has a longstanding association with the Medieval Institute. Based on an agreement reached between His Eminence Giovanni Cardinal Battista Montini (then the cardinal-archbishop of Milan, later Pope Paul VI) and the Reverend Theodore M. Hesburgh, C.S.C., then-president of the university, Notre Dame's Medieval Institute is the repository for images of most of the manuscripts owned by the Biblioteca Ambrosiana.

The Medieval Institute's Library holds over 10,000 films of early, medieval, and Renaissance manuscripts in Latin, Arabic, Greek, Hebrew, and other languages. In addition to the microfilm reels, Notre Dame has negative images of miniatures, illuminated initials, and Old Master drawings. The Institute possesses an extensive collection of catalogs containing information on manuscripts and art held by the Ambrosiana, works related to the history of the library and of Milan, and other miscellaneous reference volumes to aid work with the microfilm collection.

A project to develop a computerized index and printed catalog for all western manuscripts in the Ambrosiana began in 1979. Three volumes of that catalog have appeared under the direction of Dr. Louis Jordan (Associate University Librarian, Hesburgh Libraries). This catalog covers western manuscripts in the range A through E Superior. A partial bibliography of citations to the Ambrosiana manuscripts is kept on a card file and may be consulted by prior appointment in the Medieval Institute Library.

Professor Emeritus Robert R. Coleman maintains a complete inventory-catalog of the Ambrosiana's collection of some 12,000 drawings by European artists who were active from the fourteenth through nineteenth centuries. Our own faculty and graduate students frequently use the resources of the Ambrosiana collection, but students and scholars from other institutions are welcome to visit the Hesburgh Library in order to use these films, as well as the library's facilities and collections. Stipends may be applied for to defray the costs of conducting research with Ambrosiana microfilms at Notre Dame.