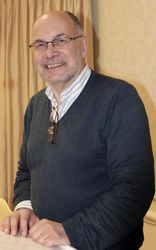 Earlier this spring the Medieval Institute welcomed Paul Russell, Professor of Celtic in the Department of Anglo-Saxon, Norse and Celtic at the University of Cambridge, for a talk entitled "Croaking About Love’: Ovid in the Medieval Monastic Classroom.” Drawing on evidence of interlinear Middle Welsh in a medieval manuscript of Ovid, Professor Russell offered fascinating insight into the use of Ovid in a classroom setting by speakers of Middle Welsh.

Professor Russell's research interests range across the Celtic languages and medieval Latin, and include early Irish glossaries; Celtic philology and linguistics; Middle Welsh translation texts; medieval Welsh law; Latin texts from the Celtic-speaking world. Recent interests have focused on learned texts in Celtic languages, and in particular glossed texts. Recent and forthcoming publications (in addition to a number of linguistic and philological essays) include a monograph on “Reading Ovid in Medieval Wales” (from which this lecture arises), a collaborative volume of essays on grammatical texts in Celtic languages, an edition of a fragmentary Latin text of Welsh law from Anglesey, and a study of the commentaries on the “Amra Coluimb Chille,” one of the earliest Irish poems.