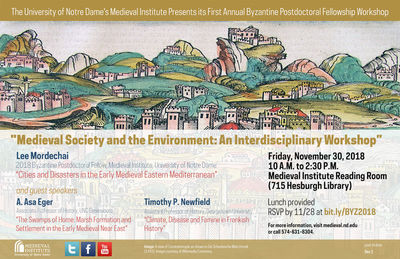 On Friday, November 30th, the Medieval Institute hosted the Byzantine Studies event “Medieval Society and the Environment: An Interdisciplinary Workshop.” This was the first workshop of the new annual series designed to showcase the work of our Byzantine Studies Postdoctoral Fellow. The workshop was organized by the inaugural fellow, Dr. Lee Mordechai, who has spent the past year using the outstanding collections of Notre Dame’s Medieval Institute and Hesburgh Libraries to examine environmental crises in the Middle Ages. Mordechai joined a panel of senior scholars including Professor A. Asa Eger (UNC Greensboro) and Professor Timothy P. Newfield (Georgetown University) to discuss the use of STEM research in environmental history.

In the morning each panelist presented a paper on his own research, and these talks provided the fodder for a lively discussion in the afternoon between audience members and the panelists regarding the future of Byzantine studies.

Mordechai started the proceedings with a reassessment of the social effects of natural disasters in his paper, “Cities and Disasters in the Early Medieval Eastern Mediterranean.”  Mordechai skillfully layered geological data, archeological findings, and traditional written sources in order to reconstruct the ramifications of a massive earthquake that struck Beirut in 551 A.D. The quake destroyed buildings and shifted the coastline, but Mordechai questioned its effects of Beirut’s society. Indeed, he rejected the narrative that the natural disaster alone was responsible for any social collapse. Instead he proposed that the phenomenon acted as a catalyst that sped up the collapse of institutions and trade systems which social forces were already weakening.

Eger’s paper, “The Swamps of Home: Marsh Formation and Settlement in the Early Medieval Near East,” explored human interaction with wetlands. Eger used a mixture of different resources, including surveillance satellite imagery from the Cold War, to reconstruct settlement patterns of Middle Eastern wetlands. Contrary to what one might assume, Eger showed that local populations often moved away from swamps in the dry season and into the heart of the wetlands in the wetter months. He suggested that many wetland dwellers were economically tied to the wetlands and embraced the distinctive ecology rather than fighting against it.

Timothy P. Newfield concluded the presentations with a paper entitled, “Climate, Disease and Famine in Frankish History.” Newfield, like his co-panelists, showed great skill in layering scientific data such as climate records and studies in paleopathology with written sources to map malaria cases in the Merovingian kingdoms. Newfield explained that the unique cyclical fever of malaria allowed him to retroactively diagnose cases with surprising certainty. He revealed a broad dispersal of populations throughout Europe that were burdened with malaria, and h=His research hinted at the potential for future research to pair malaria trends with climatic data to develop a more detailed understanding of the disease’s patterns.

Mordechai has set a high standard for future Byzantine workshops. Each panelist illuminated a different part of environmental history’s burgeoning potential. We look forward to the future work of each presenter and the promise of insightful workshops to come.