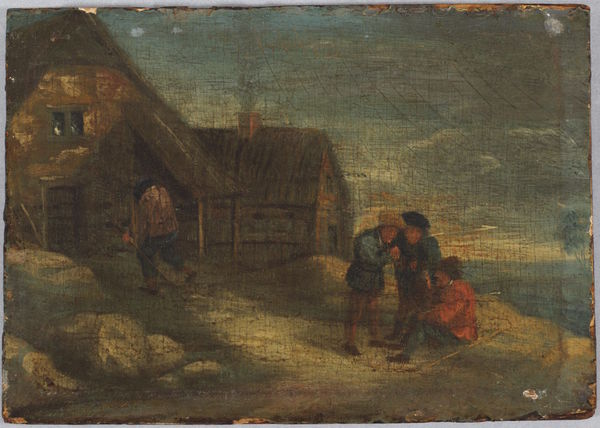 A small previously unknown panel painting, Peasants At Day’s End, named for the sunset motif that forms part of its setting, is typical of sixteenth- and seventeenth-century Early Netherlandish Genre Painting influenced by the pictorial language and style of Pieter Bruegel the Elder. Active in the 1550s and 60s, Bruegel worked in several media, but he is acclaimed for being among the first to paint scenes of everyday life, notably landscapes and the peasant class in a secular context.

The popularity of Bruegel in his own lifetime was great, but the fervor for collecting his works after his untimely death in 1569 precipitated an art market in Antwerp and the Southern Netherlands at the end of the sixteenth and in the first third of the seventeenth centuries in which copies, pastiches, and even forgeries circulated; many bore the name Bruegel, though more often as a way of honoring the master than as a deliberate deception. It might be tempting to relegate Peasants At Day’s End to the efforts of an ardent follower or forger, but a signature recently found in an unusual location, together with its comparison to a landscape by Bruegel The Elder, have prompted the question of whether the painting may be by Pieter Bruegel the Elder himself ...

This is an excerpt from “A Previously Unknown Early Netherlandish Genre Panel Painting—Pieter Bruegel the Elder?” written by Heather A. Reid, Ph.D. Read the full story.