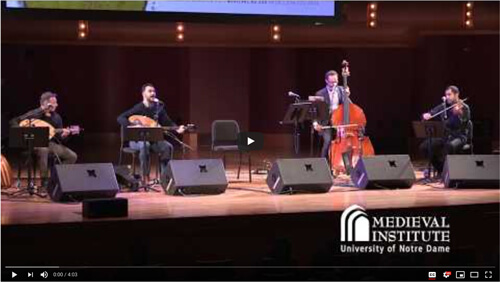 Notre Dame has recently become “one of the premier places in the world for scholars to study the culture, thought, and art of the medieval Christian Greek world—the Byzantine world,” remarked Burman. “Tonight’s event is an occasion for us to celebrate the culmination of years of work to create that reality on campus.” 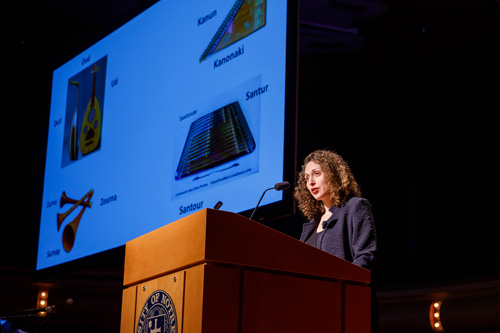 The event, as Beihammer described it, was a way “to reach out to the larger Notre Dame community and all people interested in Byzantium, both inside and outside academia. The rich musical heritage of Byzantium and Greece is certainly one of the most immediate expressions of the manifold cultural traditions that merged in the eastern Mediterranean. It combines Byzantine ecclesiastical, western, Arabic, and Ottoman influences, and transforms them into a very particular musical idiom. Our guests today are all dedicated to the practical and theoretical exploration of this heritage.”

Professor Yona Stamatis (University of Illinois, Springfield), ethnomusicologist and musician, started the evening with a lecture exploring the role of traditional music in debates about Greek national identity, following the country’s founding in 1832. “At its height, the Ottoman Empire was a multi-ethnic, multilingual empire controlling vast territories," she explained. "If you traveled throughout the Ottoman empire, you would hear music that sounded surprisingly similar; it was common for many different ethnic groups to play the same songs and to fight over ownership of these songs.” 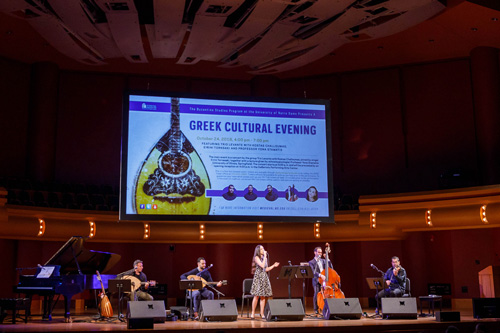 In her lecture, Stamatis had encouraged the audience to decide “whether the songs on this program sound Greek to you or not,” and to think about why. Regardless of labels, a number of audience members remarked afterwards that the music had evoked for them memories of family and childhood. “We’re grateful for many people who helped us, including donors both locally and elsewhere, the Mellon Foundation, and the Niarchos Foundation,” said Burman.