The Notre Dame Institute for Advanced Study promotes research in many disciplines in the arts, humanities, and natural and social sciences. The 2017-2018 academic year has proved fruitful for Medieval Studies at the NDIAS, as five of the seventeen Fellows' research projects focus on medieval topics. Meet the medievalist Fellows and learn more about their work below. “The Intercessory Image: Christians and the Potency of Material Objects”

Robin M. Jensen is the Patrick O'Brien Professor of Theology at Notre Dame, a Fellow of the Medieval Institute and the Nanovic Institute for European Studies, and a concurrent faculty member in the Department of Art, Art History, and Design. She specializes in the history of Christian and Jewish art and architecture, primarily from the third through ninth centuries. Her research and writing particularly attends to the function of material objects in liturgical practice and the ways that sacred images and purpose-built worship spaces convey religious meaning and shape ritual action. Her current project explores the role of relics, icons, and sacred places as mediators of sacred presence and recipients of veneration as well as attending to early Christian theological critique and defense of such practices. 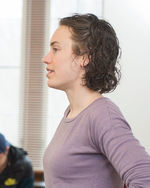 Claire "CJ" Jones is Assistant Professor of German at the University of Notre Dame and a Fellow of the Medieval Institute. She specializes in literature and religious culture in late medieval Germany. Her research draws together mysticism, chronicles, devotional literature, statutes, and liturgy. Whereas her previous work has focused on German-language devotional and normative literature, her project at NDIAS explores ritual altar-washing in medieval religious communities during Holy Week.

Her first book, Ruling the Spirit: Women, Liturgy and Dominican Reform in Late Medieval Germany, appeared with the University of Pennsylvania Press in October 2017. “Giotto’s Triumph: The Arena Chapel and the First Beginning of the Renaissance”

Henrike C. Lange holds a joint appointment in the University of California, Berkeley’s Departments of Italian Studies and History of Art. She specializes in European medieval and early modern art, architecture, visual culture, and literature in relation to the Mediterranean. She has a second area of expertise in nineteenth and twentieth century historiography, literature, and art in Europe and the United States. Her scholarship focuses on questions of perspective, narrative, medium, materiality, and spirituality in specific historical contexts. She is currently working on a monograph on Giotto’s Scrovegni Chapel and the Roman Jubilee of 1300. 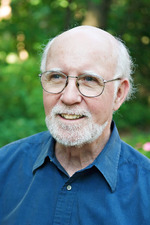 Bernard McGinn is the Naomi Shenstone Donnelley Professor Emeritus in the Divinity School at the University of Chicago where he taught for thirty-four years (1969-2003). Trained in both theology and Medieval intellectual history, McGinn taught Historical Theology and the History of Christianity at Chicago. Among his major concerns have been the history of apocalypticism and the broad story of Christian spirituality and mysticism, though he has also written on such topics as Thomas Aquinas, the Doctors of the Church, monasticism, and the Crusades.

Professor McGinn is the author and/or editor of thirty-three books and well over three hundred articles. He was Editor-in-Chief of the Paulist Press Classics of Western Spirituality Series between 1988 and 2015, and has served on the editorial boards of many publications. His current long-range project is a theological history of Western Christian mysticism under the general title The Presence of God. The first volume, The Foundations of Mysticism: Origins to the Fifth Century, appeared in 1991, and Volume VI, Part 1, Mysticism in the Reformation, 1500-1650, came out in 2016. Volume VI, Part 2, Mysticism in the Golden Age of Spain, 1500-1650, is due out in Fall of 2017. His current research and writing concentrates on Volume VI, Part 3, Mysticism in Catholic Italy, Germany, and France, 1500-1650.

Professor McGinn has served in numerous leadership roles, including as President of the Medieval Academy of America (2007-2008). He is a Fellow of the Medieval Academy and the American Academy of Arts and Sciences. His several grants and awards include a Mellon Foundation Emeritus Grant, a Fulbright-Hays Research Fellowship, an American Association of Theological Schools research award, and a Lily Foundation Senior Research Fellowship. “Historical Uses of Palliative Music: Recovering Melodic Material from European Rites for the Sick and Dying”

Elaine Stratton Hild is an editor with Corpus monodicum, a long-term research project dedicated to producing scholarly editions of significant, previously unpublished repertories of medieval plainchant. Corpus monodicum is sponsored by the Akademie der Wissenschaften und der Literatur, Mainz, and housed at the Julius-Maximilians-Universität Würzburg (Germany), where Dr. Stratton Hild has also served as an instructor of historical musicology and ethnomusicology. Her research has focused on the notation of medieval chant (particularly in pedagogical collections of poetry) and the possibilities and limitations of scholarly interpretations and reconstructions, including transcriptions into contemporary notation and digital editions.