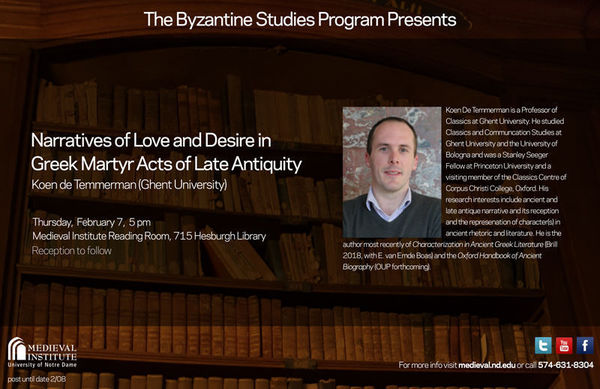 De Temmerman’s research focuses on ancient and late antique narrative (including fiction, biography, and hagiography) and its reception. His lecture, part of the Byzantine Series of Lectures sponsored by the Byzantine Studies Program at Notre Dame, discussed late antique martyr acts. Traditional scholarship, claimed de Temmerman, has often focused on those texts thought to be historically accurate accounts of persecuted Christians—but many martyr acts do not fit this model.

Texts like the Passio of Juliana are, in fact, “reminiscent of the Ancient Greek love novels and their heroines.” Juliana’s tale, for example, starts not like a passio but like a love story, which the author then reworks into a martyr act. However, concepts and themes from the novels are “ultimately put to radically different use” in hagiographical texts; while the novel’s “happy ending” typically entails the protagonists regaining their earthly social status, the hagiography culminates in rejection of the worldly in favor of the spiritual.