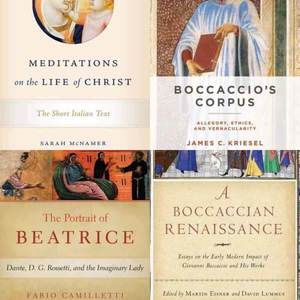 Between February 2018 and June 2019, the Devers Series in Dante and Medieval Italian Literature saw the publication of four new books on topics ranging from the reception of Dante’s Beatrice and the early modern impact of Boccaccio’s works to a critical edition of an Italian version of the Meditations on the Life of Christ and a in-depth study of how medieval ideas of the body and gender inspired Boccaccio’s vernacular and Latin writings.

Explore these titles by clicking the links below:

Meditations on the Life of Christ: The Short Italian Text, by Sarah McNamer

A Boccaccian Renaissance: Essays on the Early Modern Impact of Giovanni Boccaccio and His Works, edited by Martin Eisner and David Lummus

The Devers series takes Dante and medieval Italian literature as focal points that draw together the many disciplines and lines of inquiry that constitute a cultural tradition without fixed boundaries. Accordingly, the series hopes to illuminate this cultural tradition with contemporary critical debates in the humanities by reflecting both the highest quality of scholarly achievement and the greatest diversity of critical perspectives.

The series publishes works from a wide variety of disciplinary viewpoints and in diverse scholarly genres, including critical studies, commentaries, editions, reception studies.

Originally published by Staff at dante.nd.edu on September 09, 2019. Republished at medieval.nd.edu.