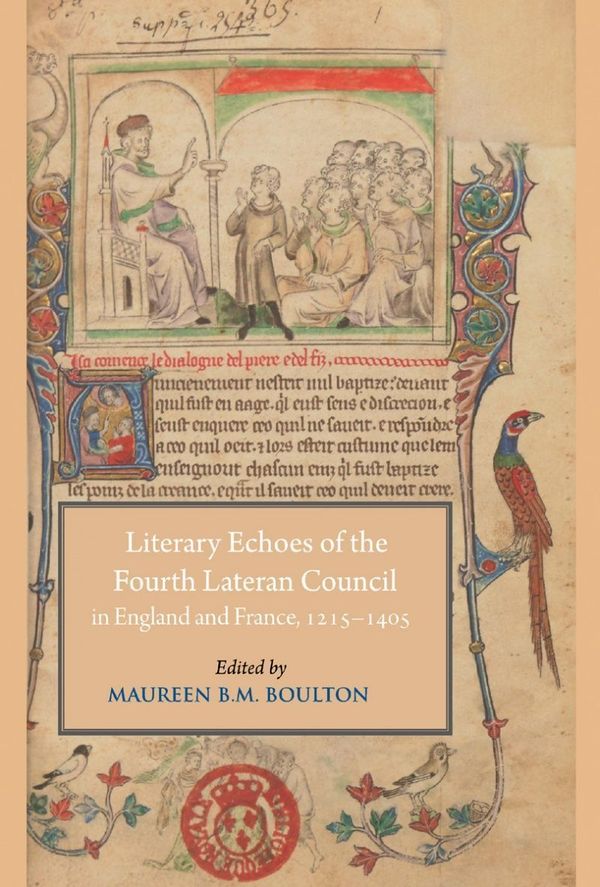 Newly released from the PIMS (Pontifical Institute of Mediaeval Studies) is a volume edited by Notre Dame Professor of French Maureen B. M. Boulton, Literary Echoes of the Fourth Lateran Council in England and France, 1215-1405.

"The thirteenth century saw a blossoming of religious literature aimed at the laity composed in the vernacular as well as in Latin for the preachers who ministered to them. It has been traditional in literary history to attribute this vernacular creativity to the Fourth Lateran Council. Although the Council was part of a longer tradition of Church reform, it nonetheless crystallized theological and ecclesiastical thought in a form that was a spur to composition by writers and preachers for more than a century. The aim of this volume is not to attempt a comprehensive account of the Council or its reach in religious writing of the period but to further our understanding of how lay people, largely neglected by earlier councils, received Lateran IV’s doctrinal definitions and disciplinary rules. The essays gathered here concentrate on England, where bishops enacted the Council’s reforms with particular enthusiasm, and France, where the earliest instructional literature appeared.

"While the volume takes into account individual works that may have responded more directly to the decrees of the local bishops who enacted the canons proclaimed in 1215, it focuses on others in which the imperatives of the Fourth Lateran Council reverberate as literary echoes, revealing remarkable and often surprising connections with the larger historical and religious context. The texts discussed span the many languages of England and France of the period: Latin, Anglo-Norman, Middle English, Old French, and Occitan. The interpretation of literature that undergirds the entire collection is suitably broad, ranging from chanson de geste and Chaucer’s Canterbury Tales to didactic works, and encompassing along the way both biblical translations and sermons whose use of literary techniques to engage their audiences makes them 'literary,' even if not always fictional."

Said Claire Waters, Professor of English at the University of California, Davis:

"This collection’s exploration of a spectrum of works for lay readers enriches our understanding of the Fourth Lateran Council’s impact on the religious imagination in late-medieval England and France. Engaging with certain key canons of Lateran IV as well as its wide-ranging pastoral spirit, the volume examines the Council’s literary aspects and offspring as well as its influence on everything from Occitan chanson de geste to the imaginative theology of Robert Grosseteste to the depiction of subjectivity in Middle English poetry. It offers readers both a thorough grounding in the didactic works and pastoralia of the period and a clear sense of their wider intellectual world that will be of value to scholars of religion, literature, and their shared concerns in this period."