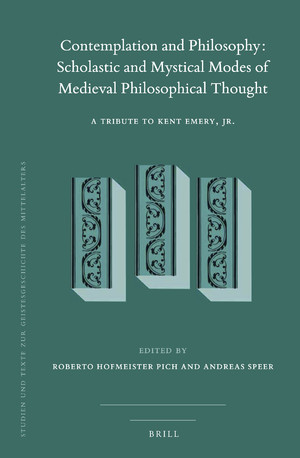 Brill has recently published a group of studies in honor of Professor Emeritus Kent Emery, Jr., under the title Contemplation and Philosophy: Scholastic and Mystical Modes of Medieval Philosophical Thought. Emery has made significant contributions to our modern understandings of medieval philosophy, theology, and textual studies, and it is fitting that his work be honored by these scholars working in the field he helped shape.

On September 11, 2018, Professor Emeritus Emery delivered the "Oeffentlicher Abendvortrag," titled "Recourse to the Library and the Bookishness of Medieval Thought: Three Illustrative Examples from the Later Middle Ages," at the "41. Koelner Mediaevistentagung. Die Bibliothek: Denkraeume und Wissensordnungen" (University of Cologne). After the lecture, he was presented with the Festschrift.

From the publisher: “This volume collects essays which are thematically connected through the work of Kent Emery Jr., to whom the volume is dedicated. A main focus lies on the attempts to bridge the gap between mysticism and a systematic approach to medieval philosophical thought. The essays address a wide range of topics concerning (a) the nature of the human soul (in philosophical and theological discourse); (b) medieval theories of cognition (natural and supernatural), self-knowledge and knowledge of God; (c) the human soul’s contemplation of, and union with, God; (d) the tradition of “the modes of theology” in the Middle Ages; (e) the relation between philosophy and theology. Various articles are dedicated to major figures of the 13th and 14th century philosophy, others display new material based on critical editions. Contributors are Jan A. Aertsen, Stephen Brown, Bernardo Carlos Bazán, William J. Courtenay, Alfredo Santiago Culleton, Silvia Donati, Bernd Goehring, Guy Guldentops, Daniel Hobbins, Roberto Hofmeister Pich, Georgi Kapriev, Steven P. Marrone, Stephen M. Metzger, Timothy B. Noone, Mikolaj Olszewski, Alessandro Palazzo, Garrett R. Smith, Andreas Speer, Carlos Steel, Loris Sturlese, Chris Schabel, Christian Trottmann, and Gordon A. Wilson.”