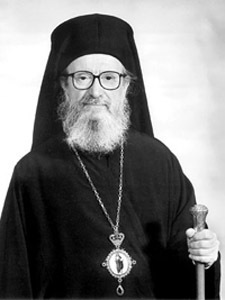 The University of Notre Dame has established an endowed chair in Byzantine Theology. The position, which will focus on the theology of the medieval Greek-speaking church, will be named in honor of Archbishop Demetrios Trakatellis, primate of the Greek Orthodox Church of America.

The Archbishop Demetrios Professorship in Byzantine Theology is a central component of the University’s efforts to expand the scope of its renowned Medieval Institute — which was the first of its kind in the United States — to include teaching and research on the Eastern Roman Empire. The chairholder will be a member of the Department of Theology, as well as of the Medieval Institute. The Department, which includes more than 50 full-time faculty members, is known throughout the English-speaking world for its strength in a variety of fields, especially patristic and medieval theology.

“The new chair in Byzantine Theology will complement the mission of our Medieval Institute and, more broadly, the University’s acknowledged strengths in patristic and western medieval theology,” said Rev. John I. Jenkins, C.S.C., Notre Dame’s president. “We are pleased to honor Archbishop Demetrios with the naming of this chair, as we are extremely thankful for his integral role in strengthening relations between Roman Catholics and Orthodox Christians around the world.” 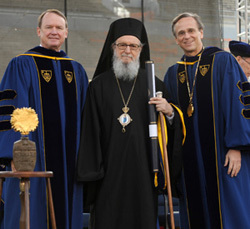 “The University’s decision [to put the chair in my name] constitutes a great honor for me,” said Archbishop Demetrios, who was presented with an honorary doctorate by Notre Dame in 2010. “I am truly humbled by this announcement and deeply grateful for such a development.”

He added: “I pray that this gracious gesture by your prominent university will serve as another meaningful step in promoting understanding, respect, and enrichment, thereby enabling our churches to more fully respond to God’s call for Christian unity.”

Recent grants, of $800,000 each, from the Andrew W. Mellon Foundation and the Stavros Niarchos Foundation have brought the University closer to its goal of raising $3.2 million.

Notre Dame is ideally suited to advance the study of Byzantine history, culture and theology. Its Medieval Institute is internationally respected, and its library collections on western medieval Europe and Byzantium are widely regarded as among the best in the world. Furthermore, the University’s Catholic heritage means that it can reach beyond the limitations of a secular university to study one of history’s richest Christian traditions.