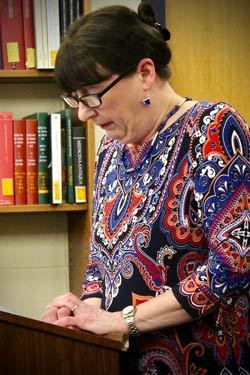 On Thursday, February 23th, the Medieval Institute was pleased to welcome guest speaker Deborah Black, Professor of Philosophy and Medieval Studies at the University of Toronto. That evening, Prof. Black delivered a learned lecture entitled "Constructing Averroes's Epistemology." Black's talk focused on three topics in Averroes's philosophical works: assimilation of primary intelligibles and empirical propositions; testimony, especially tāwātur (tradition); and the rejection of Avicennian intuition (hads). Black's talk drew heavily from his commentary on the Aristotelian corpus and placed Averroes's thought in relationship to that of his predecessors, Al Fārābī and Avicenna. Her talk was followed by a reception in the Byzantine Reading Room.

Friday morning, graduate students and fellows of the Medieval Institute attended a seminar led by Prof. Black who continued her discussion of “Knowledge, Certitude, and Skepticism in Classical Falāsifah.” Professor Black followed the thought of al-Fārābī and Avicenna regarding knowledge and certitude, an inquiry inspired largely by Abū Bishr Mattā’s translation of the word knowledge as used by Aristotle in his Posterior Analytics as certain knowledge. Prof. Black argued that although Western medieval philosophical discussions of certitude arose as a response to skepticism, by contrast Arabic philosophers' work on certitude led to (instead of from) skepticism.

The MI thanks Professor Black for a stimulating lecture and seminar!