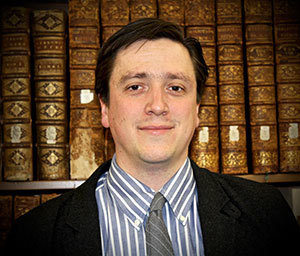 The Medieval Institute is very pleased to announce that Denis Robichaud of the Program of Liberal Studies has been awarded the 2016 Olivia Remie Constable Prize in Medieval Studies for study at Oxford this summer. This prize was generously established last year by Robert M. Conway to honor our colleague Remie Constable, former director of the Medieval Institute, and was held last summer by Kent Emery, Jr., also as it happens of the Program of Liberal Studies, who completed work for an ongoing multi-person Duns Scotus edition. The Prize enables Institute scholars to stay at Harris Manchester College, just blocks from the Bodleian, for up to three weeks, and provides enough support for a scholar to pursue related research as needed in the UK and on the Continent. In this case Denis will also be following up with work in Hamburg.

Robichaud is a student of history and philosophy in the fifteenth century, and particularly of Marsilio Ficino. He is now the principal investigator for a project that oversees the edition of Ficino’s translations into Latin of several works by Plato essentially unknown earlier in the Middle Ages. For the next decades and even centuries these Latin translations became the central form of access to a new Platonic corpus in European philosophy and intellectual history. Much here depended upon three late medieval collections in manuscript of Plato’s work in Greek, along with some smaller associated manuscripts. Robichaud will spend his summer finishing work on this manuscript transmission, particularly with several key manuscripts in Oxford.

Our profound thanks to Robert Conway for making this possible, and our warmest congratulations to Denis!