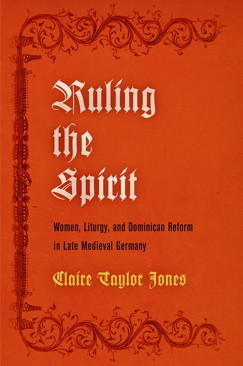 From the Publisher: Histories of the German Dominican order have long presented a grand narrative of its origin, fall, and renewal: a Golden Age at the order's founding in the thirteenth century, a decline of Dominican learning and spirituality in the fourteenth, and a vibrant renewal of monastic devotion by Dominican "Observants" in the fifteenth. Dominican nuns are presumed to have moved through a parallel arc, losing their high level of literacy in Latin over the course of the fourteenth century. However, unlike the male Dominican friars, the nuns are thought never to have regained their Latinity, instead channeling their spiritual renewal into mystical experiences and vernacular devotional literature. In Ruling the Spirit, Claire Taylor Jones revises this conventional narrative by arguing for a continuous history of the nuns' liturgical piety. Dominican women did not lose their piety and literacy in the fifteenth century, as is commonly believed, but instead were urged to reframe their devotion around the observance of the Divine Office.

Jones grounds her research in the fifteenth-century liturgical library of St. Katherine's in Nuremberg, which was reformed to Observance in 1428 and grew to be one of the most significant convents in Germany, not least for its library. Many of the manuscripts owned by the convent are didactic texts, written by friars for Dominican sisters from the fourteenth through the fifteenth century. With remarkable continuity across genres and centuries, this literature urges the Dominican nuns to resume enclosure in their convents and the strict observance of the Divine Office, and posits ecstatic experience as an incentive for such devotion. Jones thus rereads the "sisterbooks," vernacular narratives of Dominican women, long interpreted as evidence of mystical hysteria, as encouragement for nuns to maintain obedience to liturgical practice. She concludes that Observant friars viewed the Divine Office as the means by which Observant women would define their communities, reform the terms of Observant devotion, and carry the order into the future.

Ruling the Spirit is available from the University of Pennsylvania Press.