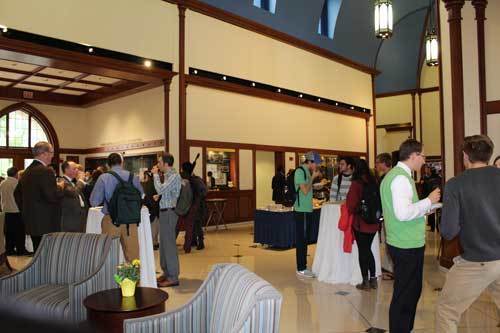 The Medieval Institute was pleased to welcome this year's annual Conway Lecturer, William J. Courtenay, Professor Emeritus in History at the University of Wisconsin, Madison.

On Thursday evening, September 29th, Courtenay set the theme of the Medieval Institute's annual series: the social, cultural, and religious life of the scholars and masters at the medieval University of Paris. In his inaugural lecture, "Candles for Our Lady: Arts Faculty Nations as Confraternities," he presented his archival work documenting the various expenditures, regulations and customs of the four ethnic nationes (French, English, Norman, and Picard) that comprised the University of Paris beginning in the twelfth century. Highlighting the evidence regarding their devotional practices toward the Virgin Mary, Courtenay argued that each nation, often affiliated with a Parisian church and holding a devotion to a patron saint, might have been akin to a confraternity–a voluntary association established for the promotion of special works, charity or piety. This stimulating lecture was followed by a warm reception in the atrium of the Eck Vistor Center. 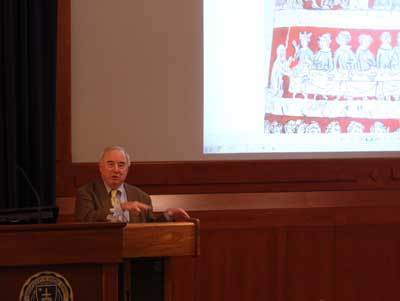 The second lecture, on Tuesday, October 4th, "Gaudy Night: Colleges and Prayers for the Dead," made a distinction between the socially- and academically-focused halls of the University of Paris and the colleges, associations of masters and scholars whose regulations often featured a regular life of religious devotion and practice. Courtenay cited a striking variety of evidence which included records from the famed Collège de Jean d'Hubant (Ave Maria College), illustrated manuscripts depicting works of charity carried out by college members, and photos of their excavated burial plots. He concluded his lecture by nuancing the long-standing parallels drawn between the medieval Islamic madrasa–a religious and academic community in the medieval Islamic world–and the European medieval university which might have been inspired by its Islamic counterpart. 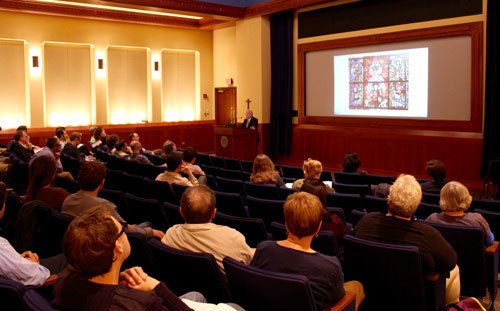 The third and final lecture, on Thursday, October 6th, "A Hidden Presence: Women and the University of Paris," shed light on the little-studied activities and involvement of women in the life of that Parisian university. Courtenay identified the Virgin Mary as the most prominent woman associated with the University. As a symbol of divine wisdom as well as of divine mercy, Mary was the patroness of the Parisian studium and appeared on the grand seal of the University itself as well as on the seal of almost every master teaching at Paris, possibly as early as the late twelfth century. While there is no direct evidence that women taught in any of the faculties of Paris, Prof. Courtenay noted their frequent appearance in Parisian registers, sometimes as wives of masters or as business owners patronized by the University of Paris, among other positions. 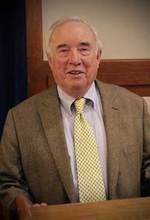 Courtenay expressed that his "principal reason for accepting the invitation [to give the Conway Lectures] was the honor of being asked to do so." He especially appreciated visiting with old friends and having access to our "excellent library collection, which is particularly rich in the history of medieval universities ... and the most extensive collection of any library in the world" in that area. Courtenay added, "in depth of faculty members of major reputation and achievement in medieval history, philosophy, and English literature (the areas I know best), Notre Dame has the strongest program in medieval studies anywhere in North American and perhaps the world. I hope the university will do everything possible to maintain those assets in faculty personnel and library resources, for if lost or even weakened, they are hard to recover."

As is customary for the series, Courtenay's erudite study will shortly appear in print under the auspices of the University of Notre Dame Press. He plans to dedicate the published version of the lectures to Abbot Canon Astrik Gabriel, a longtime acquaintance of Prof. Courtenay and former director of the Medieval Institute. Future scholars on the topics covered in these lectures will doubtlessly derive much benefit from his book. Read more about this annual lecture series and the publications that have arisen from it.