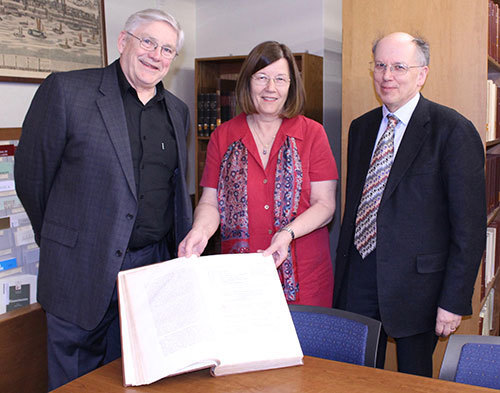 The Monumenta Germaniae Historica, founded in 1819, has long been one of the leading scholarly organizations for the study of the Middle Ages in Europe. Begun in the aftermath of the Congress of Vienna in 1815 and the reorganization of Europe in the aftermath of the French Revolution and the defeat of Napolean, this Society set for itself the grand goal of gathering and publishing all texts and documents central to the medieval history of the German peoples. In practice the MGH, as it is known, soon emerged as the leading center for critical historical scholarship in medieval history generally across Europe, reaching well beyond Germany, an enterprise which other nations then sought to emulate, for instance, with the Rolls Series in England. The Society continues its work today, now approaching the 200th anniversary of its founding. It is still widely regarded as setting the benchmark for the edition and study of medieval texts, now in Latin, German, and Hebrew, and for advancing relatively quickly toward making full use of digital technologies. Originally located in Berlin, the MGH moved to Munich following the Second World War.

Each year the central board of the Society selects medieval historians beyond Germany to honor by naming them “corresponding members” of the Society. This year the University of Notre Dame becomes the only North American university honored with two such nominations. John Van Engen, a member of the Notre Dame’s History Department since 1977 and also Director of the Medieval Institute (1986-98, 2014-16), was elected a corresponding member in 1993 for his work in cultural and religious history in the German lands and beyond. David Ganz, a visiting professor at Notre Dame and resident in Cambridge, England, was elected this year for his work in Latin paleography and Carolingian culture. Notre Dame’s Medieval Institute is immensely proud of all its faculty, and pleased to see them recognized in the world of scholarship at large.