What does Thomas Aquinas have to do with Greece?

With Nanovic Institute support, Daniel Contreras (Ph.D. student, Medieval Institute) recently traveled to Athens to participate in the annual Symposium Thomisticum, with this year’s focus being the influence that ancient and medieval Greek authors had on Aquinas, as well as Aquinas’ influence on later Greek and Byzantine thinkers.

This was naturally a very enriching experience, since it allowed me to sharpen my sensitivity to the issues that are controversial among current scholars. These conversations will help me to improve the quality not only of this paper, but also, and more importantly, of my dissertation.

In this paper I examine some of the most decisive Neoplatonic motives behind the medieval doctrine of the primum cognitum (which is the topic of my dissertation). As it is known, the Liber de causis (or Book on Pure Goodness, as it was sometimes called following the Arabic title) was one of the most read and commented Neoplatonic texts of the Middle Ages. It conveyed to medieval thinkers a rather idiosyncratic version of Neoplatonism, one that, thanks to the mediation of Arabic philosophy, prepared and facilitated the scholastics’s awareness of some of the distinctively metaphysical and epistemological problems that engaged them. Proposition 4, in particular, although frequently quoted in debates about creation, the metaphysical composition of creatures and the ontological status of essences, also figured prominently in discussions concerning the primum cognitum and the boundaries of our natural knowledge of God. 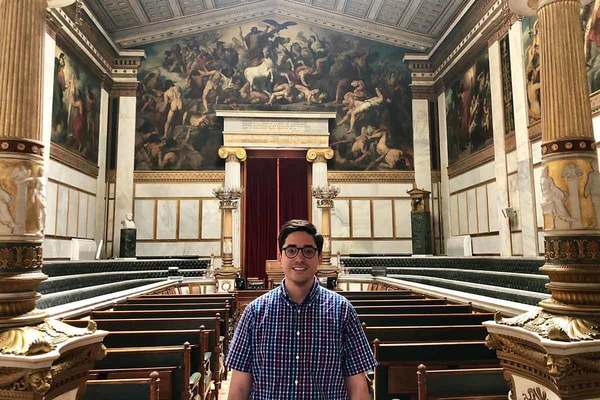 I showed how three major thinkers of the thirteenth century dealt with a tension they encountered in proposition 4 of the Liber de causis. This tension was caused by a philosophically pregnant modification the author of the Liber de causis had introduced to the views expressed by props. 138 and 89 of Proclus’s Elements of Theology, which were the inspiration behind the Liber de causis’s prop. 4. It was precisely this interpretative context that provided Bonaventure, Albert the Great, and Thomas Aquinas with a suitable occasion to discuss their views on what is first known to us: is the being that is first created, of which prop. 4 speaks, the most universal and indeterminate of intelligible forms (namely, the concept of being), or rather one particular, concrete substance, albeit the highest of all creatures (namely, the most perfect of separate intelligences)?

After presenting, I had the opportunity to discuss at length various aspects of it with some of the most renowned scholars in my field. This was naturally a very enriching experience, since it allowed me to sharpen my sensitivity to the issues that are controversial among current scholars. These conversations will help me to improve the quality not only of this paper, but also, and more importantly, of my dissertation.

Originally published by Chris Stump at nanovic.nd.edu on July 03, 2018. This article has been edited for release on medieval.nd.edu.