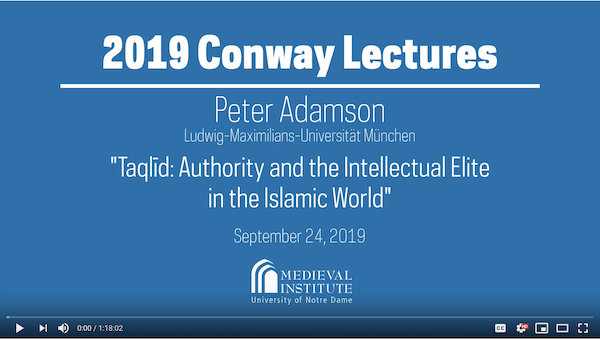 For the first time since the Conway Lectures began in 2002, the Medieval Institute is making the videos of this year's lectures available on YouTube.

In his three-part lecture, titled “Don’t Think for Yourself: Faith and Authority in Medieval Philosophy,” 2019 Conway Lecturer Peter Adamson, Professor of Late Ancient and Arabic Philosophy at Ludwig-Maximilians-Universität, addressed questions of authority and belief formation in three medieval cultures, Latin Christendom, the Byzantine East, and the Islamic world, challenging the widespread assumption that these were authority-bound cultures in which freedom of thought and expression was nearly impossible.

In addition to his teaching, Adamson has published widely in ancient and medieval philosophy and is the host of the popular podcast series History of Philosophy Without Any Gaps, which boasts over 300 episodes and now appears as a book series with Oxford University Press. Adamson is the first alumnus of Notre Dame to be invited as a Conway lecturer.

To see the full lecture series, click on the thumbnail above or go to the MI's YouTube channel.

The lecture slides are also available on our website (and linked in the video descriptions).