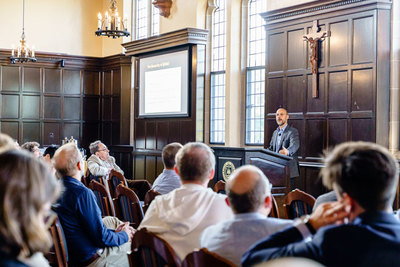 On September 24–26, the Medieval Institute welcomed Peter Adamson, Professor of Late Ancient and Arabic Philosophy at Ludwig-Maximilians-Universität in Munich, Germany, and a Notre Dame graduate (Ph.D. '00), to deliver the 2019 Conway Lecture series. In addition to his teaching, Adamson has published widely in ancient and medieval philosophy and is the host of the popular podcast series History of Philosophy Without Any Gaps, which boasts over 300 episodes and now appears as a book series with Oxford University Press. Adamson is the first alumnus of Notre Dame to be invited as a Conway lecturer.

First inaugurated in 2002, the Conway Lectures are an endowed, annual lecture series supported by Robert M. Conway (’66), a Notre Dame graduate and long-time friend of the Medieval Institute. The lecture series brings senior scholars of international distinction to Notre Dame each fall to speak on topics across a variety of disciplines. The lectures are then published by the University of Notre Dame Press. 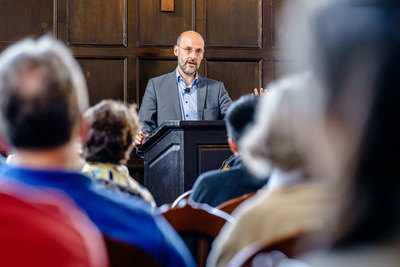 In his three-part lecture, titled “Don’t Think for Yourself: Faith and Authority in Medieval Philosophy,” Adamson addressed questions of authority and belief formation in three medieval cultures: Latin Christendom, the Byzantine East, and the Islamic world, and he challenged the widespread assumption that these were authority-bound cultures in which freedom of thought and expression was nearly impossible.

In his first lecture, “Taqlīd: Authority and the Intellectual Elite in the Islamic World,” Adamson laid the intellectual framework for his topic and introduced critical terms, concepts, and many of the historical discussions and questions surrounding religious authority.

The second lecture, “Testing the Prophets: Reason and Medieval Religious Debates," was devoted to how debates over religious authority played out across geographical and religious borders. 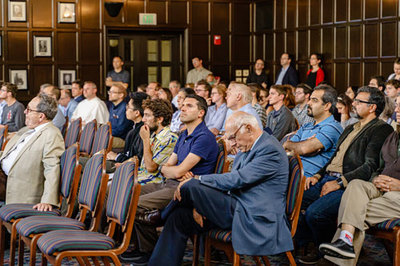 Finally, in the last lecture, “The Right to Speak: Women in Byzantine and Latin Christian Philosophy,” Adamson introduced the voices of women from the Latin west and from the Byzantine empire who also addressed questions of religion and authority.

The lectures will be published shortly on the Medieval Institute's YouTube channel, to which you can subscribe; you can also sign up for notifications if you'd like to be alerted when the lectures are ready for viewing.

The Institute thanks Professor Adamson for offering to our community this skillful examination of debates surrounding religious authority, and we look forward to seeing his lectures in print as a monograph in the Conway Lectures Series from the University of Notre Dame Press.

The 2020 Conway Lectures will be on the theme of "Race in the Middle Ages" with the speaker to be announced.