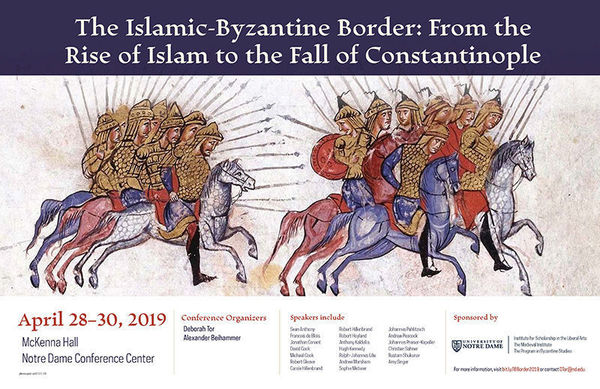 Over the last weekend in April, Notre Dame hosted a three-day conference on the "Islamic-Byzantine Border: From the Rise of Islam to the Fall of Constantinople." The event was jointly sponsored by the Institute for Scholarship in the Liberal Arts, the Medieval Institute, and the Program in Byzantine Studies. It gathered experts of both Christian and Islamic history to discuss one of the most concentrated regions of diversity, division, and cultural blending in the Medieval world.

The unique history of frontier regions has become a dynamic topic of research in recent years. In one aspect the borders represented real divisions between different administrations or groups of people. Yet the areas adjacent to the border often saw more frequent interactions between cultures than locations farther from the frontier. The complexity of this region leads many scholars to approach its history from one side, either examining the Byzantine or the Islamic border. The Islamic-Byzantine Border Conference, however, offered a rare opportunity to hear research on both sides of this divide.

The event organizers, Deborah Tor and Alexander Beihammer, both faculty fellows of the Medieval Institute, brought together an impressive roster of speakers. Nineteen of the most prominent scholars of Byzantium and the Islamic Near East illuminated multiple facets of the Byzantine-Islamic border. Topics ranged from Robert Hillenbrand’s analysis of Byzantine motifs in Mongol art to Johannes Preiser-Kapeller’s archeology laden examination of Western Caucasia; from Christian Sahner’s study of the Jarājima who lived the mountains of the border to Sophie Metivier’s critical investigation of the literary heroes who inhabited this same region. A complete list of the presenters and their papers is available in the conference program.

The papers and discussions at the Islamic-Byzantine Border Conference reflected Notre Dame’s expanding presence in the world of Byzantine and Islamic studies. Over the past decade the Medieval Institute has expanded its recourses and offerings in order to sustain continued research of the Byzantine and Islamic worlds. It is the hope of many that events like April’s conference will continue to bring scholars of the Eastern Mediterranean to Notre Dame and expand our understanding of the medieval world.

You can find images from the conference and some initial reactions to the different papers on the Medieval Institute’s Twitter account under #IslamicByzantineBorder.