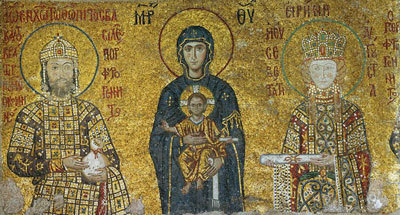 Since the founding of the Medieval Institute in 1946, Notre Dame has become a world-class institution for medieval studies. While scholarship initially focused on the “Latin West,” with special attention to philosophy and theology, the MI has since expanded its scope considerably, hosting fifty faculty fellows in thirteen departments and, in the last decade, building its Byzantine Studies Program.

Byzantine Studies explores the history and culture of Byzantium, sometimes called the “Eastern Roman Empire.” Despite the immense cultural, economic, and military power of this empire, which lasted over a millennium after the fall of Rome, the Byzantine world has received comparatively little attention from American scholars—a state of affairs Notre Dame set out to change.

“Byzantium produced distinctive art, it produced distinctive architecture, it produced lots of quite important and interesting scholars,” said Thomas F. X. Noble, Professor of History, in 2008, shortly after Notre Dame received a four-million-dollar challenge grant from the National Endowment for the Humanities for Byzantine Studies. “Our whole goal is to take the East on its own terms,” he explained. “Not to make it an inferior sibling of the West, but to take it seriously.”

Notre Dame has indeed taken this mission seriously. After receiving the NEH grant, the university dedicated space in the Medieval Institute to Byzantine Studies: the Stavros Niarchos Foundation Reading Room, on the seventh floor of Hesburgh Library. This has enabled scholars to take advantage of the university’s earlier acquisition of the Milton V. Anastos Library of Byzantine Civilization, consisting of over 40,000 volumes (the second-largest Byzantine collection in the nation after Harvard). An endowed chair in Byzantine Theology was also established (the Archbishop Demetrios Professorship), as was a Postdoctoral Fellowship for a Byzantinist scholar in 2017.

This spring, the university’s Medieval Institute celebrated the graduation of its first class of Byzantinists, Erik Ellis and Charles Yost, who received their Ph.D.s. this past Saturday. “Because of generous donations from the Mellon Foundation, the Niarchos Foundation, and private donors, and the hiring of an amazing group of Byzantine experts, Notre Dame and the Medieval Institute are now among the leading centers in the world for research and Ph.D. education in Byzantine Studies,” said Professor Thomas E. Burman, Robert M. Conway Director of the Medieval Institute. “I'm delighted to see these efforts come to fruition in the outstanding dissertations of Erik Ellis and Charles Yost.”