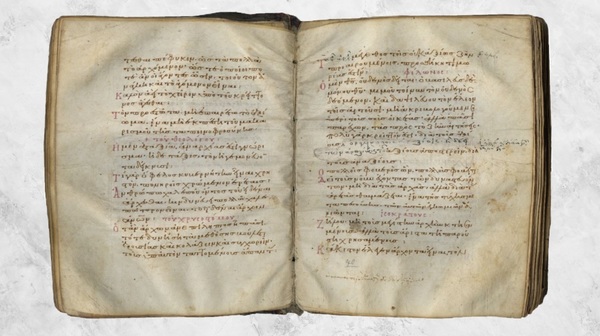 Manuscript of the Loci communes of pseudo-Maximus the Confessor

The University of Notre Dame Hesburgh Libraries has acquired a late 11th-century Greek codex containing the works of pseudo-Maximus the Confessor. This Greek codex is an exceptionally significant pre-modern manuscript. It is now the oldest bound book in the department’s collection and is among the University’s most exceptional items.

The aquisition of this illustrative example of Byzantine book culture was made possible, in part, by a grant from the B.H. Breslauer Foundation (New York City, NY), along with support from the Medieval Institute and other Notre Dame partners. The manuscript is the only known copy of the text in North America.

“This very early Byzantine manuscript in a contemporary binding, dating to the rebirth of the empire under Alexios I Komnenos at the end of the 11th-century, is an exceptional original resource for the study of a major moment in Byzantine history,” said Louis Jordan, associate university librarian. “We are deeply grateful to the B.H. Breslauer Foundation for this donation, providing our students and faculty the opportunity to peruse an original resource that will add a new dimension to their studies.”

The manuscript is a late 11th-century codex copied in Byzantium, which transmits the Loci communes of pseudo-Maximus the Confessor. The Loci communes is a florilegium (anthology) of sacro-profane texts, which contains fragments and sentences of Christian and pagan authors. The sayings are arranged thematically in 71 chapters such as “Purity and Chastity”, “Accusations and Slander”, “Piety, Prayer, Laughter, Beauty, and Self-Love”. The collection was attributed falsely to Maximus the Confessor (580–662), a monk and theologian, and is therefore now ascribed to an anonymous author known as pseudo-Maximus.

The codex is comprised of 173 parchment folios and still retains its Greek quire signatures and decorative headpiece. The volume is also remarkable for its handwriting, which is an example of Perlschrift, the calligraphic script known for its symmetry, rounded letters, and reduced amount of abbreviations. It also features a well-preserved Byzantine Greek binding.

The acquisition was procured by David T. Gura, Ph.D., curator of ancient and medieval manuscripts in Hesburgh Libraries Rare Books and Special Collections. The manuscript was purchased from Les Enluminures (Chicago, IL), and was previously in the collection of Martin Schøyen (Norway). Over the past several years, Gura has worked to expand access to the medieval manuscript collection in a variety of ways. He offers graduate-level classes in Latin Paleography, Western Codicology, and Greek Paleography, and supports student and faculty research in several disciplines and creates physical exhibitions and digital content.

The Impact on Research and Scholarship at Notre Dame

Throughout the course of its history, Notre Dame has demonstrated a commitment to the use of primary source materials to ignite the interest of undergraduates and to develop the research skills among its graduate students.

With this acquisition, the University’s collection now allows scholars to experience Greek script from the 4th-century AD through the 19th-century, filling a gap of book culture predating the Nicaean and Palaeologan periods.

“This acquisition strongly supports Notre Dame's program in Byzantine Studies. In particular, the manuscript augments the collection's breadth for the teaching of Greek paleography and Byzantine book culture. Notre Dame is now the only university in North America that offers a graduate-level course of this nature using primary materials,” said Gura.

The University’s manuscript collections are accessible to all faculty, staff, and students from Notre Dame as well as other institutions. The Libraries also selectively digitizes rare collections to make them searchable and accessible. As such, the pseudo-Maximus manuscript will be digitized and made available for students and scholars around the world.

The pseudo-Maximus manuscript is the centerpiece of the fall exhibit, Hellenistic Currents: Reading Greece, Byzantium, and the Renaissance, in Rare Books and Special Collections. This exhibit, curated by Gura, features Greek manuscripts and imprints which shows the diffusion of Hellenism and Greek script from the 4th-century AD to the 19th-century. The objects reflect the characteristics of Greek culture, language, and learning which began to spread with Alexander the Great throughout the world to Rome, the Byzantine Empire, the Italian Renaissance, and continued to survive under Ottoman rule, and even thrived in 16th-century France.

Hesburgh Libraries’ Rare Books and Special Collections at the University of Notre Dame is open to the public and welcomes students and faculty researchers from on campus and around the world. An active program of classes, workshops, exhibitions, and digital projects highlight the department’s vital role in teaching, learning, and research at Notre Dame and beyond. Collections offer more than 130,000 volumes of printed books and periodicals and over 6,000 linear feet of non-book materials including manuscripts, printed ephemera, broadsides, prints, posters, numismatics, and philately. World-class holdings include Medieval studies, Catholic studies, Irish studies, Italian literature, Latin American and Iberian history, and literature, sports, and physical culture, and theology and church history.