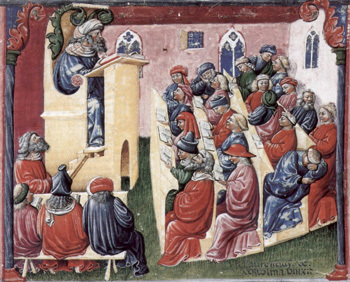 Each year the Medieval Institute sponsors Working Groups, an opportunity for faculty fellows and graduate students to investigate a topic relating to shared research interests.

Christianity and Philosophy in Late Antiquity

A perennial topic in the study of late ancient Christianity is the relationship between properly Christian literature and mainstream (i.e. non-Christian) Greek philosophy. It is widely acknowledged that without a thorough grasp of ancient and late ancient philosophy, one cannot fully understand authors like Clement of Alexandria, Origen of Alexandria, Gregory of Nyssa, Augustine of Hippo, Pseudo-Dionysius the Areopagite, and Maximus the Confessor — not to mention Christians like Boethius and John Philoponus, who are well-known for their properly philosophical works. Philosophy formed more than merely these authors’ “context”; it was, or at least often was, the mode in which they wrote. To read them well is to take seriously the philosophical character of their argumentation, at least in those texts where this is appropriate. Although countless scholars have discussed Christianity’s relation to philosophy, the question has often been pursued strictly within the parameters of one or another of the modern disciplines. This working group is meant to provide a space for interdisciplinary study, in the form of both regular reading group discussion and shared individual research, which considers early Christian authors as sophisticated philosophical thinkers in their own right.

The Medieval Liturgy Working Group is dedicated to interdisciplinary scholarship on liturgy across the long Middle Ages, in diverse traditions of both East and West. Notre Dame has one of the largest representations of scholars dedicated to research on medieval liturgy, spread across at least six different departments and programs at the university. Our Medieval Institute working group brings these and other faculty, researchers, and graduate students together in order to share work in progress, advance methodological reflections on the discipline, and increase visibility and interdisciplinarity for liturgical studies at Notre Dame and in the broader academy.

Ordering Knowledge in Poems and Homilies in Late Antique Religions

In the last few decades, scholars of late antiquity have come increasingly to note the ways that distinct genres engaged in unique ways of conceptualizing and ordering the world. Rather than flattening the array of Jewish, Christian, and Islamic media as all providing equal evidence for some past world “out there,” scholars have turned to ask how particular genres spoke from, to, and brought into being, diverse micro-worlds. This focus on the ways that genres ordered the world has led to new ways of conceptualizing what it means to know—to know God, self, others, and creation. This working group refracts questions about this through the specific genres of late antique poems and homilies. These genres of poetry and homily played out differently between Latin, Greek, Hebrew, Syriac, and Arabic, between Judaism, Christianity, and Islam, and across the “long” late antiquity of the third through ninth centuries. But alongside this variation and diversity there emerges in the study of poetry and homilies parallel questions of literary form, performative context, and ways of knowing. Because of their unique formal and performative demands, both poems and homilies articulated and rearranged content in unique ways, and did so before particular audiences (the audiences, for example, of the elite study circle or the large, festal liturgy). Not only did content meet the demands of form, but audiences demanded that poems and homilies be affectively and emotionally moving, and capable of competing in the competitive media landscape of late antiquity.

Religion and Pluralism in the Medieval Mediterranean

The working group will explore questions pertaining to the study of religions, religious interactions, the formation of identity and community, and the state of the fields of religion, literature, and history in the medieval Mediterranean. Our group will continue to invite participants to consider the ways in which the medieval Mediterranean world was shaped by religious pluralism and the interaction of religions (principally Judaism, Christianity, and Islam) and how that reality is reflected in contemporary scholarship. Through this working group, participants will continue to appreciate contemporary scholarship on various aspects of the medieval Mediterranean across a wide range of disciplines.

In the upcoming year, the working group will continue to develop and enhance the DSB app, which includes further research and writing of articles. The public-facing goal of these articles is to situate the Distichs in their literary, historical, reception, and educational context for the student or researcher who works on the text. Making research accessible to the general public is a core commitment of the DSB. The articles also promote research that will help the team to continue their own scholarly work on the Distichs and other related texts, including work on future editions and cross-cultural transmission, which will be presented at future meetings. Because the DSB project is a digital humanities project, it appeals to students with different strengths and interests, including graduate and undergraduate students who are keen to work with languages and research and those who are more technologically oriented. Collaboration across disciplines is a core requisite for the success of this project.

The Working Group application deadline is April 1st of each year. Review the Proposal Instructions to prepare and submit an application.

The MI Faculty Committee will review applications and the MI will inform groups of decisions by the end of April.

Approved groups will want to review the Guidelines for Working Groups so they are familiar with the necessary steps for planning their events and running their groups.