Each year, beginning in 2004, the Medieval Institute graduate students organize a lecture, inviting a scholar to speak and conduct a subsequent graduate seminar.

This year's speaker is Eugenio Refini, Associate Professor of Italian at NYU, speaking on April 21, 2022, from 5–6:30 p.m on "Whose Aristotle? Latinate Knowledge and Vernacular Translation in Medieval Italy." A reception will follow the lecture.

Event Details and How to Join

Hussein Fancy, Associate Professor of History at the University of Michigan), "The Impostor Sea: The Making of the Medieval Mediterranean" 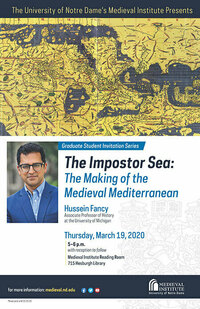 Rémi Brague (Professor Emeritus of Medieval and Arabic Philosophy at the University of Paris I), "Aquinas' Doctrine of Providence and its Relevance Today" 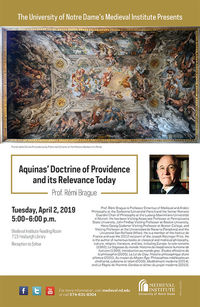 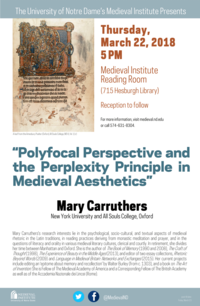 Michelle P. Brown (University of London), "Words to be Seen and Images to be Read: Visual Literacy and the Book in Pre-Conquest Britain"

Mary J. Carruthers (New York University), "The Art of Forgetting and the Art of Recollecting in the Middle Ages"

Michael Allen (University of Chicago), "The Text in the Medieval Vineyard: Philology as Historical Science"