About the Mellon Fellowship

Since 2001, through the generous response of the Andrew W. Mellon Foundation to a challenge grant awarded to Notre Dame by the National Endowment for the Humanities, the Medieval Institute has offered an A. W. Mellon Junior Faculty Fellowship in Medieval Studies to an outstanding young tenure-track faculty member to do research while in residence for the year at Notre Dame.

The intent of this Fellowship is to enable its holders to complete research and writing on a book manuscript in advance of tenure. To that end, towards the conclusion of their residencies, Fellows present their work at our Annual Mellon Colloquium.

Three senior scholars, chosen in cooperation with the Medieval Institute, are invited to campus for a half-day public seminar discussing the Fellow’s research. Informal conversation continues with the speakers over lunch. In a private afternoon session, the senior scholars also read and discuss a draft version of the Fellow’s work with a view to improving the manuscript before its submission to a press.

Mohamad Ballan, Assistant Professor of History, Stony Brook University, “Lord of the Pen and Sword: Genealogy and Sovereignty in the Medieval Islamic West"

As part of the university's response to the 2019 coronavirus pandemic, the Medieval Institute did not appoint a Mellon Fellow for the 2021–21 academic year. 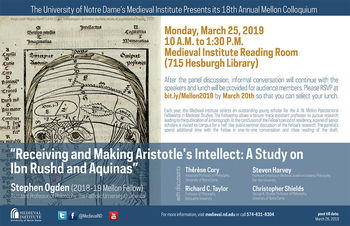 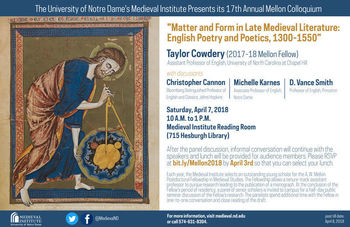 Published as "Masters and Schools at St.-Laurent: Rupert of Deutz and the Scholastic Culture of a Liègeois Monaster" in Medieval Liège at the Crossroads of Europe: Monastic Society and Culture, 1000-1300, eds. Steven Vanderputten, Tjamke Snijders, and Jay Diehl (Brepols, 2017), 151-82.

Published as “The Survival of Medieval Antiquity: Fifteenth-Century Transformations of the Roman Antique Tradition in Castile and Beyond,” in Early Modern Constructions of Europe: Literature, Culture, History, eds. Florian Kläger and Gerd Bayer (Routledge, 2016), 71-89.

Christina Normore, Northwestern University (Art History), "A Feast for the Eyes: Art and Performance in the Late Middle Ages"

Published as A Feast for the Eyes: Art, Performance, and the Late Medieval Banquet (Chicago, 2015)

Suzanne LaVere, Indiana University-Purdue University, Fort Wayne (History), "Out of the Cloister: Scholastic Exegesis of the Song of Songs, 1100-1250"

Published as The Beguines of Medieval Paris: Gender, Patronage, and Spiritual Authority (University of Pennsylvania Press, 2014)

Published as Poetics of the Incarnation: Middle English Writing and the Leap of Love (University of Pennsylvania, 2013)

Published as Creating Cistercian Nuns: The Women’s Religious Movement and Its Reform in Thirteenth-Century Champagne (Cornell UP, 2011). Winner, 2012, Best First Book of Feminist Scholarship on the Middle Ages (Society for Medieval Feminist Scholarship).

Alice Sheppard, University of Pennsylvania (English), "Making and Unmaking Anglo-Saxons: Reading the Past of the Anglo-Saxon Chronicle"

Published as Families of the King: Writing Identity in the Anglo-Saxon Chronicle (University of Toronto Press, 2004)